How much volume should you do? That’s perhaps the most important question to ask in any training program. A new study gives us answers.

40 Reasonably trained women with ~3 years of serious training experience were divided into 4 groups with different training volumes. For most muscle groups, this corresponded to 5, 10, 15 or 20 sets per week, all performed in one workout. The program was a push-pull-legs split, as you can see below, and lasted 24 weeks.

I’ve summarized the results in the following graph. You can see the 5 or 10 set group achieved the most muscle growth in every site and gained the most strength on every exercise. Going up to 15 sets reduced gains across the board and the 20 set group made the worst progress of all groups on every measure. 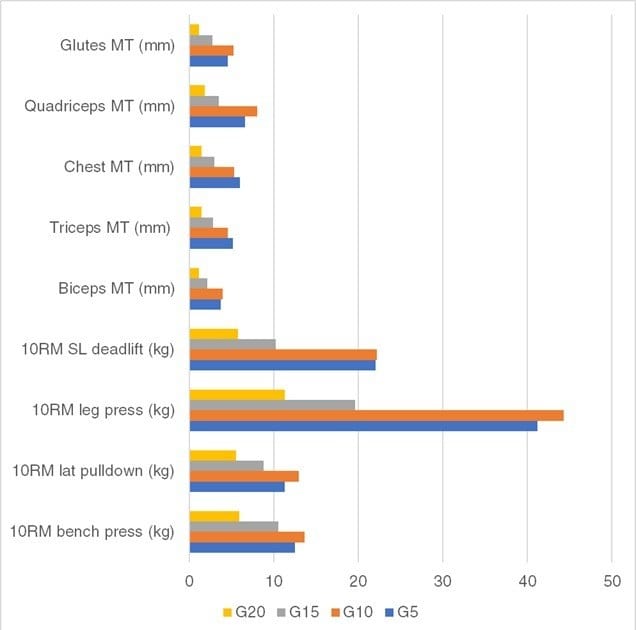 So far for high volume training, right? The 20-set group spent 24 weeks to gain 11 kg on their leg press and gained less than a quarter of the booty gains of the 5 and 10-set groups. Ouch!

What explains the abysmally poor results of the high volume groups compared to the other studies showing better gains with more volume, including Schoenfeld’s latest 45 set study?

I think there are 2 reasons for this, which the authors both note. (In general, this is a damn good paper.) First, they performed all of their volume in one workout per week. Research in rats has shown the post-workout increase in muscle protein synthesis (‘muscle growth’) starts to plateau after 5 sets per muscle group. The results are also similar to the German Volume Training research, which showed better gains with 5 instead of 10 sets per exercise per workout.

On the other hand, research on training frequency finds the gains from training more frequently than once per week are inconsistent, but that’s based mostly on lower training volumes in untrained lifters. Several studies find benefits of training a muscle group more than once a week in trained lifters and higher training frequencies improve markers of recovery capacity. Since these were trained women on a high volume program (G20 at least), it’s plausible they just couldn’t productively cram all that volume in one workout. After a certain point, additional volume may only promote greater fatigue and protein breakdown and delay recovery, resulting in a state of overreaching and eventually overtraining syndrome.

Second, they trained to momentary muscle failure. Now, whenever I read a study claiming the participants trained to failure, especially when the study included squats and deadlifts, my face goes like this. 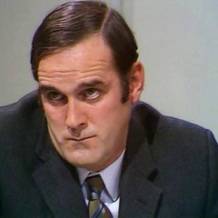 Most researchers don’t seem to actually lift and think ‘volitional failure’ is the same as momentary concentric muscle failure. Volitional failure just means someone pussied out when the reps became tough. Most people don’t come near actual momentary concentric muscle failure, actually trying but failing the last rep. I’ve coached hundreds of people and trained in gyms in over 50 different countries. I see squats to legitimate failure about as often as Eminem still produces good songs. He has his moments, but the glory days are long gone. So I was pleasantly surprised to read the researchers critique the definition of failure used in other studies. In this study, the women were supervised with specific attention paid to them actually training to failure. While I still seriously doubt they squatted and deadlifted to failure regularly, they took the training program seriously based on a 0% drop-out rate in the 40 women over 24 weeks. If they trained to failure often enough over 24 weeks, that could result in overtraining, as training to failure has been shown to significantly prolong neuromuscular recovery and suppress anabolic hormone levels while increasing cortisol levels.

With the above in mind, I think this study is strong evidence that there is no one-size-fits-all training volume that works best for everyone. We see very different responses to training volume in studies using different training programs. Higher training frequencies and not training to failure regularly may considerably increase recovery capacity and thereby strength and muscle gains.

Another thing that this study indirectly tested is the dose-response relationship of training volume between muscles of different sizes. It’s often argued that smaller muscles can handle a higher training volume, whereas larger muscles ‘take up more recovery capacity’. I’ve also heard the opposite, that bigger muscles can take more volume because it takes more training to stimulate all fibers. Based on this study, neither is true. The dose-response between training volume and muscle growth was the same in the biceps, the prototypical small muscle group, and the quads and the glutes, two of the largest muscles in the body. They all had an optimal volume of 10 sets in this study. If you want to read anything into the inconsistent absolute difference scores, the pectoralis major and triceps were the exceptions with an optimal volume of just 5 sets. This completely contradicts the idea that bigger muscles need a lower (or higher) training volume than smaller muscles.