How much volume should your program have for best results when cutting? I’ve written extensively about training volume on my website and social media, but there isn’t much research on people that are in energy deficit. This new study by Roth et al. (2022) from Germany aimed to fill that gap.

The researchers separated a bunch of trained men into 2 groups that performed the exact same training program and fat loss diet for 6 weeks with 1 exception: the medium volume group (MVG) did 3 sets for the most important exercises, whereas the high volume group (HVG) did 5 sets for these exercises. You can see the exact training programs below. It was an upper/lower split performed twice weekly: 2x upper and 2x lower body.

The researchers tracked the men’s muscle growth, fat loss and strength development to see which training volume led to better gains. Strength was measured via the weights used in training, which I think is great. Many studies do 1RM testing, but there’s no need for all the issues associated with that. It’s much easier and more reliable to just track the weights used in someone’s training. Muscle growth was measured at the full-body level via body composition (via multi-frequency bioelectrical impedance analysis) and as muscle thickness of the rectus femoris of the quads (via ultrasound).

How to count training volume

If you read the above 2 paragraphs and looked at the training programs attentively, you should see a problem. The goal of the study is to determine an optimal training volume, but training volume varied majorly per muscle group. For some muscles like the lateral delts the comparison was 6 vs. 10 sets, whereas for other muscles like the quads (vasti) it was 12 vs. 20 sets. So if the lower volume resulted in better body recomposition, is that because the optimal volume is 6 sets or 12 sets? We can’t say, so unfortunately, body composition is largely uninterpretable in this study.

Indeed, the researchers clearly used muscle thickness as the study’s primary measure of interest. Thus, we should calculate the training volume for the rectus femoris. The researchers calculated this as 12 vs. 20 sets for the quads, but I disagree with this calculation of training volume. Exercises like squats and leg presses barely train the rectus femoris (RF) of the quads. The RF is a bi-articulate muscle that flexes the hip and extends the knee. During squatting movements, you need to extend the hip, but activating the RF would cause a hip flexion moment: this would pull you down rather than up. (Technically, if you had crazily strong glutes and were limited primarily at the knee, the RF could contribute more, but this is not a realistic scenario.) That leaves leg extensions as the only effective exercise in the study for the muscle of interest. The actual training volume comparison of this study was thus essentially 6 vs. 10 sets per week. With this in mind, we can get to the study’s results.

There were no compelling differences between the lower and higher volume groups. Formally put, there were no significant time x group interaction effects for muscle thickness, fat loss, lean body mass loss or strength development, except for 1 spurious moment in week 6 when the lower volume group technically had better strength development. If you look at the overall results plotted below, it’s clear there was no overall trend for anything. 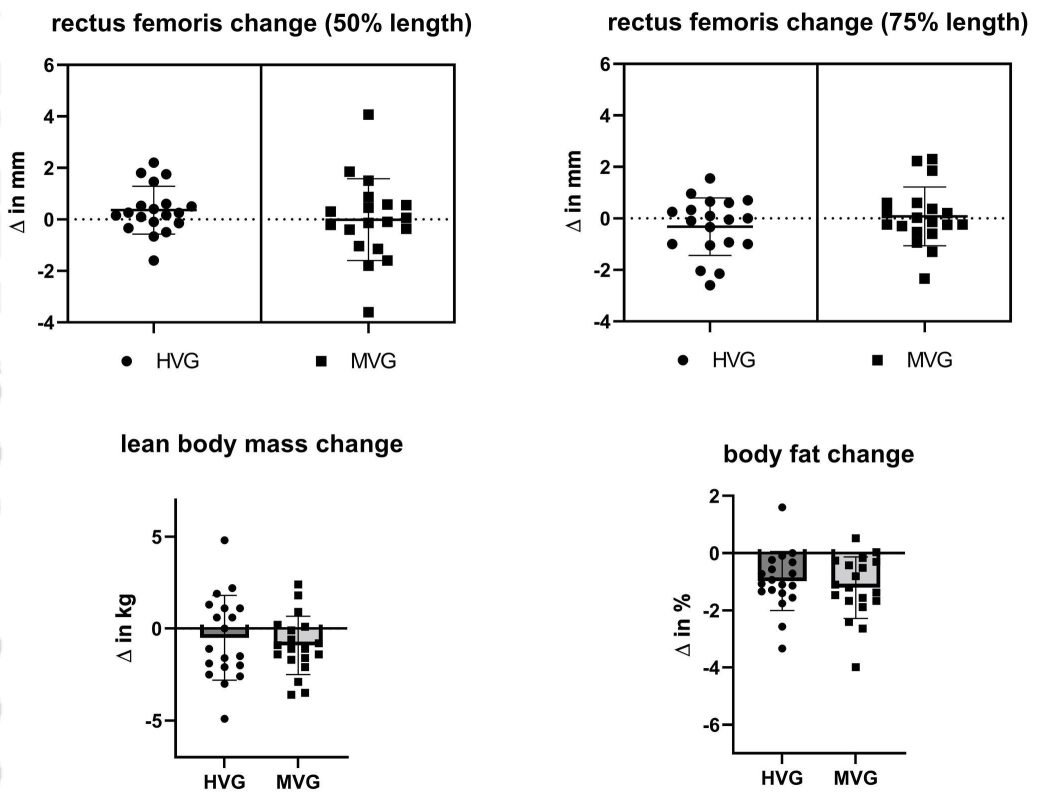 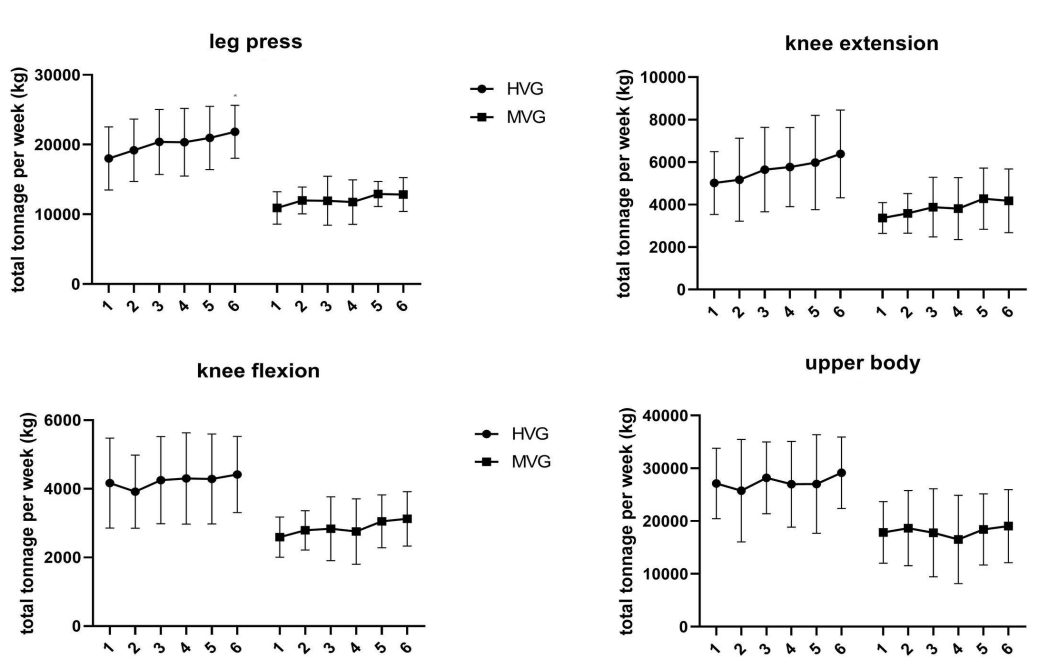 More generally speaking, both groups had really poor gains. Despite going down only 1% in body fat, lean body mass comprised 30-52% of the weight loss. That’s downright terrible. Even competitors don’t typically lose more than 25% of their weight as lean body mass. The participants were supposed to be in a 33% deficit based on the researchers’ starting calculations (going from a maintenance of 45 kcal/kg to 30 kcal/kg), but using the calculations I outlined in this article, I calculated their actual energy deficit was only about 10% per day. The disappointing fat loss was probably partly due to the simplistic calculation used by the researchers and partly due to non-adherence to the diet by the participants. Either way, the participants clearly weren’t in an excessive energy deficit, so that couldn’t explain the poor gains.

Exercise science frequently runs into the problem of trying to compare ‘near zero vs. near zero gains’. We can only recruit a limited number of participants. The participants are typically college students that don’t adhere very well to the study program and can only be studied for a single semester. A small sample size, a limited study duration and small effect sizes of the measured variables together majorly limit statistical power: our ability to detect any existing differences between groups.

However, if these results are actually completely accurate and reliable, this would be huge news. Lack of a difference between 2 volumes may seem like a wash, but it’s actually very informative. If we assume there’s an optimal training volume – an inverted U-curve relation between volume and gains – as most research does, then a lack of difference between 2 points on that curve logically means the optimal volume must lie within those 2 points, otherwise 1 point would have been closer to optimal than the other. I’ve illustrated this in the graph below: equal gains means a horizontal line can be drawn between the 2 points, which means the peak of the curve must fall between these 2 points. Theoretically, these study findings thus imply the optimum training volume when cutting is as low as 6-10 sets per muscle group per week. However, given the study’s limitations, I would not interpret the results this literally. 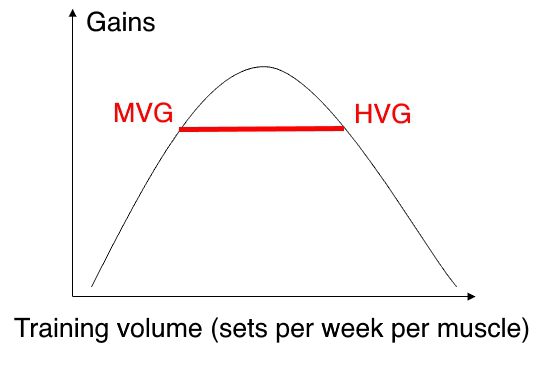 By the way, the researchers also analyzed sleep and mood as measures of perceived recovery status. I put very little stock in these measure as proxies for recovery status, because there are monumental differences between muscular recovery and mental wellbeing. One of the biggest red pills moments readers of my book report is that I show that most negative effects of a diet are psychological effects, not physical effects. In any case, there were also no differences in the trainees’ reported sleep quality or mood states in the new study.

If we take this study’s findings at face value, they logically imply the optimal training volume when cutting is only 6-10 sets per muscle group per week, at least in the context of this study. However, in reality this study was most likely underpowered to detect any differences between the groups. So what training volume should you use when cutting? I recommend a lower volume than when bulking for most individuals. An energy deficit logically implies a recovery deficit. For example, in a study of Ramadan fasting, athletes gained strength faster when they reduced their volume by 22% than when they stuck with their previous training volume. In my experience, a 20-33% decrease in training volume when cutting compared to when bulking works well for most people. (As for how much volume you should do while bulking, see this article and my more recent social media posts and podcasts on this topic.) I hope this knowledge helps you optimize your diet programs.

How many carbs do you need for maximum gains? A systematic review
How many grams of carbohydrate should a strength trainee consume per day to fuel their training... Read More »

Do you need pre-workout carbs for maximum strength performance?
Recently I led the most comprehensive review to date on how many carbs strength trainees need... Read More »
Home » Posts » Articles
Share via