In my previous article I debunked the myth that you can’t lose fat and build muscle at the same time. You can and most people should. And that’s not the only major misconception surrounding thermodynamics and the energy balance principle. 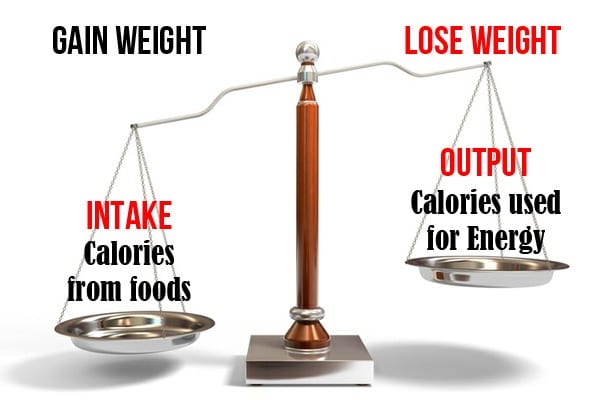 In fact, the following image, which is basically the same as the above image but uglier, appears in the respectable journal of Nutrition Reviews from Oxford University Press, the largest in the world. 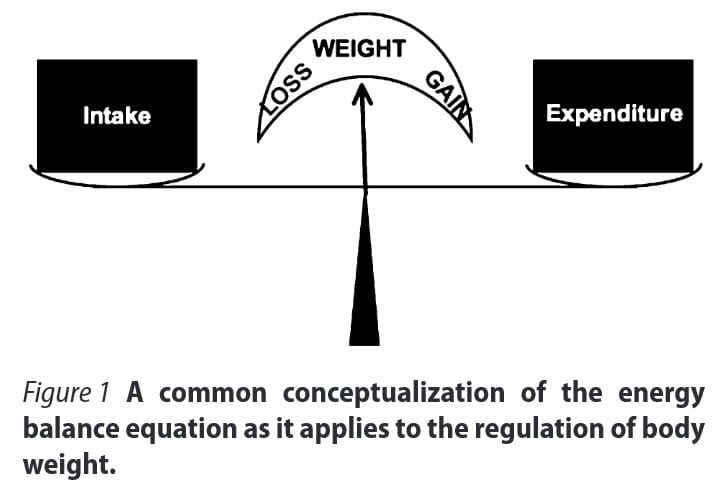 Yet it’s wrong to equate energy balance with weight change. Within the context of a sedentary individual on a balanced diet that only changes his or her energy intake, it is generally correct. However, as a law, which is how most people perceive it, it is false.

The logical error is that not all bodily mass corresponds with stored energy. There are many ways to change your weight while remaining in energy balance.

There are many ways to change your weight long term without changing your body’s amount of stored energy.

Moreover, you can be weight stable while being in a deficit. In my article on the myth that you can’t lose fat and build muscle at the same time, I showed evidence of complete body recomposition in a client and in many scientific studies. You can gain muscle (technically lean body mass, but that’s what most people mean when they say ‘gain muscle’) just as fast as you’re losing fat and a a result your weight will remain the same. This invalidates the idea that energy balance dictates weight change, since evidently being weight stable does not mean you are in energy balance. And being in a deficit does not mean you will lose weight.

And yes, that means the test of finding your ‘maintenance calories’ by seeing at which caloric intake you remain weight stable for 1-2 weeks is not universally correct. I’ve had some clients achieve nearly perfect body recomposition during contest prep. Obviously, their contest prep caloric intake wasn’t their maintenance intake.

And it gets better.

Truth: You can gain weight in a deficit

In true spirit of bodybuilding nihilism, I received the following comment on this site when I explained earlier that energy balance does not dictate weight change.

Challenge accepted. In fact, how about we double the odds? Say 6 pounds of lean body mass gain while losing 2 pounds of fat? Ok, you’re on.

Here’s the DXA scan progress of one of my clients. Note how he gained 6.2 lb of muscle while losing 2.1 lb of fat in under a month. Here‘s the full anonymized DXA scan report of his progression.

And it gets better still.

Truth: You can lose fat in a surplus

“If someone gained more muscle than he lost fat, he gained weight and thus he was in a caloric surplus by definition.” This was the objection I received from several people when I tried to explain the above earlier. As we saw above, however, this is based on the flawed assumption that energy balance dictates weight change.

This isn’t just a semantic argument where people just have different definitions. The energy balance equation is a mathematical principle.

With the metabolizable energy densities of fat and lean body mass from Hall (2008) we can precisely calculate the deficit or surplus someone was in based on that person’s body composition change. Someone who gained 3 pounds of muscle and lost 1 pound of fat must have been in a net energy deficit of 1810 kcal. This is physics, not an opinion.

Taking this a step further, you can lose fat in a surplus(!) Fat loss occurs during a surplus when you gain muscle fast enough to offset the energy your body receives from the fat loss.

However, based on Hall’s calculations you have to gain muscle at a rate 5.2 times as high as your rate of fat loss. In other words, you have to gain 5.2 pounds of muscle for every pound of fat you lose. This is uncommon to the point that I used to say the body would simply not let this occur in a natural lifter. I have also never seen this occur in research in a situation where fat loss was significant.

However, based on an analysis of my own client data, I have to correct myself. It is possible to lose fat in a surplus for a natural lifter. In fact, in my data it occurs even in women.

For example, here’s the DXA progression report of one of my female clients. We only started working together in the last period of this report, so you can ignore the first 2 rows. In our coaching period, she lost 1.3 pounds of fat while gaining 6.8 pounds of lean body mass. That júst puts her in positive energy balance during this period by 170 calories (kcal). Here is the full DXA documentation of her progression. As such, I apologize to everyone whom I told that you can’t realistically lose fat without being in a deficit as a natural lifter. You can. 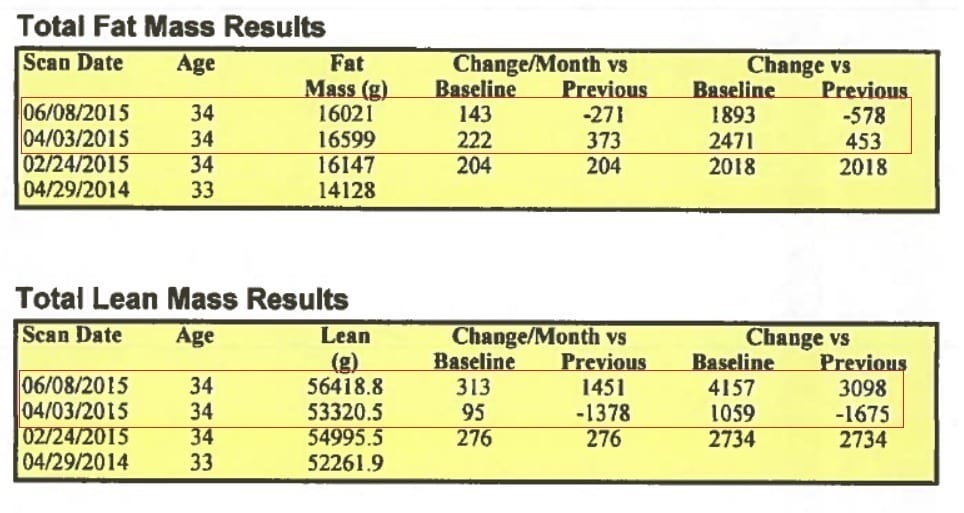 Truth: You can gain fat in a deficit

Following the same logic, you can also gain fat in a deficit. If you lose muscle 5.2 times as fast as you get fat, you gain fat while remaining in a deficit. Unless your weight loss program really sucks though, I should hope this only ever occurs if you stop training, you have a serious medical condition or there are drugs involved.

Energy balance and weight change are almost wholly distinct from each other.