Training volume is a hotly debated topic, especially after the Schoenfeld et al. (2018) study finding more-may-be-better all the way up to 45 sets per muscle group per week, yet Barbalho et al. (2018) found things start to deteriorate after 10 sets per muscle per week. Training volume is widely considered to be the most important variable of any training program, akin to the energy intake of a diet plan, so it’s important to get it right.

The researchers compared 3 groups of intermediately trained men. They were benching around 220 lb (100 kg) at the start of the study. The groups were identical in all ways except how many sets they performed for each exercise, which resulted in them performing 16, 24 or 32 sets per muscle group per week. They supposedly trained to momentary muscle failure, but you know the face I make when researchers proudly claim their moderately trained subjects all did 16 sets of squats to true failure per week. (Hint: it’s the face your mother made when the principal called her to talk about your behavior at school and when she asked you what you did, you answered: “Nothing!”). So yeah, let’s say the subjects trained to volitional failure.

Here are their programs. Basically 2 push and 2 pull workouts each week, everything the same in each group except the number of sets per exercise. Their diets were also monitored and there was no reported significant difference between groups or change in any group’s macronutrient intake over time.

And below is what happened. The 32-set group got ultra-Chad gains with Arnold-where-you-at? biceps growth, while the 16-set group got the progress Lyle McDonald did when he went off on another one of his rampages about Schoenfeld’s volume study and lost what credibility he had left in evidence-based fitness. (Don’t worry, Lyle: I’ll always be your number one fan. Just don’t be such a dick.)

Basically, the more volume they did, the better their gains. While the comparisons didn’t all achieve statistical significance, the trend was clear for muscle growth in all 3 studied muscle groups and squat strength. Only bench press strength didn’t show a clear dose-response, but the best gains were still made by the highest volume group.

A common critique against studies showing beneficial effects of high training volumes is: “It’s all just swelling, just water, not actual myofibrillar muscle growth.” While swelling likely plays a role and also likely increases in line with training volume due to edema and muscle damage, it’s unlikely to be the sole explanation for why muscle volume increased with training volume for several reasons.

So, all aboard the 32-sets-per-muscle train? Not quite yet. That last sentence was important. The subjects trained with a 1-minute rest interval between sets. I wrote the last review paper on the effects of rest intervals on muscle growth together with Brad Schoenfeld, and we co-authored a follow-up study with the general conclusion that 1-minute rest intervals don’t cut it for maximum muscle growth. Bodybuilders thought this was good because of the pump, but we now know metabolic stress doesn’t directly stimulate muscle growth. Muscle growth is primarily the result of mechanical tension on the muscle. Short rest intervals don’t allow you to put a lot of tension on your muscles, because you accumulate too much neuromuscular fatigue. This decreases muscle activation and work capacity. Especially when training to supposed failure on heavy compound exercises, if you have to do 8 sets with a 1-minute rest interval, your last sets won’t have many reps or you’ll have to majorly cut back on the weight and less weight means less tension on the muscle. Thus, you can probably get the same muscle growth with fewer sets with longer rest intervals and that’ll be much safer and humane.

All in all, this study provides strong evidence that higher training volumes can be highly effective for muscle growth and, to a lesser extent, strength development. Just beware of going overboard. These subjects were young, trained men at a university, which means they had a low stress life, although they probably didn’t realize it yet at the time, and they were likely in energy surplus. What’s optimal for you depends on your individual recovery capacity. 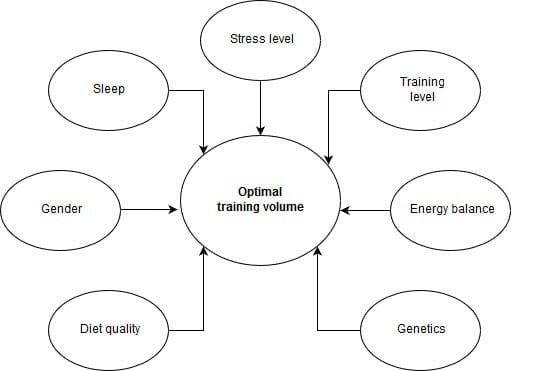