Most people have body parts that they want to get leaner than others. Women may struggle with the stubborn fat on their thighs and hips or upper arms, whereas men typically struggle with the fat on their belly. It would be nice if we could ‘spot reduce’ these areas, but can you really target this fat specifically with exercise and choose where you burn fat?

Most people believe you can, as evidenced by the millions of men doing crunches to get sixpack lean and women doing ‘thigh blaster’ programs to get the fat off their thighs. This may indeed result in fat loss in the desired areas. An ab exercise program may cause abdominal fat loss, for example. However, this is not necessarily evidence of spot reduction, because it doesn’t mean you lost more fat in the abdominal region than in the rest of the body. Exercise increases energy expenditure. If you burn more calories across the day than you consume in your diet, your body will burn some of its own energy stores, like those in your fat tissue, to make up the difference. Some of this fat may come from the areas you exercised, but you may have lost the same amount of fat if you had performed a different form of exercise with the same energy expenditure. This energy balance principle is undeniable physics.

To see if we can influence where your body burns fat with targeted exercise, we have to turn to the scientific literature with more controlled data.

Why spot reduction was considered a myth

In 1983, Katch et al. investigated if a sit-up exercise regime helped target your belly fat. It didn’t. The sit-up exercise protocol did not influence fat cell size or fat layer thickness more in the abdominal region than on the backs and butts of the participants.

A similar study in 2011 had the same finding: an abdominal exercise program did not achieve greater abdominal fat loss than a non-exercising control group consuming the same amount of calories in the diet.

In 2013, a novel study design was used to test the possibility of spot reduction. This time the study participants did high repetition leg presses with one leg without training the other leg. The trained leg did not lose more fat than the untrained leg. In fact, fat loss was only significant in the upper body. Since many of the participants were overweight, this was not too surprising. Overweight individuals typically lose the fat on their trunk, including the particularly unhealthy visceral fat around their organs, before other body parts lean out. Women in particular, due to their genetically ‘pear shaped’ body fat distribution, tend to lose fat in the upper body much sooner than in the lower body.

Kostek et al. (2007) used a similar design and found no greater fat loss in the strength trained arm than the non-exercised arm with MRI measurements.

Barely worth mentioning: Noland & Kearney (1978) also failed to find spot reduction when comparing a ‘spot reduction’ program to a ‘general’ program, but really both programs were bodyweight cardio (more like calisthenics vs. controlled bodyweight cardio) and the measurements and statistical methods were quite uncontrolled.

These studies led the evidence-based fitness community to firmly conclude spot reduction is a myth. However, in both of the abdominal exercise studies and the calisthenics study there was no loss of total body fat mass at all. In the leg endurance exercise study, there was no loss of body fat mass in either leg. In the arm training study, total body fat mass was not measured. As such, it is possible that simply not enough fat was lost in any of these studies in the first place to observe a difference in the rate of fat loss in the exercised compared to the non-exercised body parts. Logically, when neither group loses fat, the rate of fat loss in both groups is zero and of course then no spot reduction will occur.

In conclusion, none of these studies preclude the possibility of spot reduction occurring when someone actually loses a considerable amount of fat.

The only study that falsified spot reduction where there was actually a loss of body fat in the exercised area is Kordi et al. (2015). In this study, 2 groups of overweight women were compared: diet only and diet + ab training. Both groups lost the same amount of total body fat at the end of the study as per bio-electrical impedance analysis. They also lost the same amount of total abdominal fat. This could be considered evidence against spot reduction, but as discussed earlier, overweight women normally lose the fat from their belly first whatever they do. Plus, neither group gained any lean body mass and there was a 25% drop-out rate in the study, so we can question how seriously the women were exercising. Not that it would have mattered much, as the exercise program had literally zero progressive overload: it was the same bodyweight drill throughout the entire study.

More importantly, to study spot reduction we need to look at the rate of fat loss on the abs compared to the rest of the body. Unfortunately, the only other regional non-abdominal measurement of fat loss was hip circumference. There was no significant difference in this change between groups. In spite of all the study limitations, if spot reduction was a real thing, we should have seen some evidence of it. Well, if you look at the actual results below, there was. Nothing statistically significant, but the ab training group lost more belly fat on all 3 measures of abdominal fat loss, whereas the diet only group had a greater decrease in hip circumference. That’s exactly the pattern you’d expect from spot reduction: training the abs would improve abdominal fat loss but slow down fat loss in other areas (energy balance still applies: given the same total fat loss, spot reduction can only change the ratio of where you lose the fat). 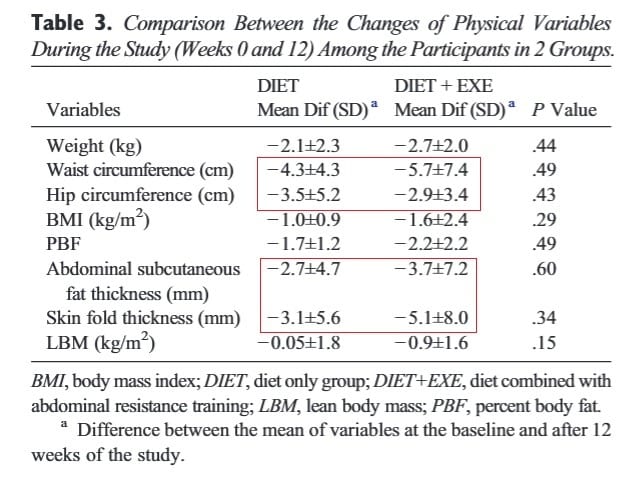 So far, the evidence for or against spot reduction is too limited to say much about whether spot reduction can occur in seriously training individuals on a fat loss diet.

Theoretically, we have a good reason to believe spot reduction may occur. We know that spot lipolysis is real: you acutely burn more fat in fat regions near active muscles than in fat regions distant from active muscles. Concretely, when you are exercising your left leg, more fat is burned off from your left thigh than your right thigh. The local fat oxidation appears to be the result of the increased temperature and blood flow near the exercised tissue. This may increase the delivery of fat burning hormones like epinephrine and norepinephrine. Myokines released by the active muscle, like IL-6, may also increase fat oxidation rates in nearby fat tissue.

In 1965, Mohr conducted the less controlled version of Kordi et al. (2015). Overweight women were put on an abdominal exercise program. It was a pretty odd exercise program: 6 daily voluntary isometric contractions on the floor of 1 second ab bracing and 6 seconds of ab hollowing. Instead of comparing groups, the subjects were kept weight stable and all women whose weight deviated by more than 3% were excluded from the study. 2 Caliper skinfold measures and 2 circumference measures from the waist then showed significant fat loss. Given that no weight loss occurred and the exercise program couldn’t have induced much muscle growth (no resistance, no progressive overload), fat loss must have been minimal and these results suggest a redistribution of fat mass, i.e. spot reduction. However, it’s plausible the women did still lose fat and this came from the abdominal region as expected, so this is not very convincing evidence of spot reduction per se.

In 1968, Olson & Edelstein found that a strength training program performed only for 1 arm resulted in a significant decrease in fat mass on that arm, as measured by skinfold calipers used on the triceps, whereas there was no change in triceps skinfold readings in the untrained arm (a non-significant increase even). Now, this may be an artifact of the calipers, as muscle growth may compress a given amount of fat mass and lead to the false reading of fat loss. 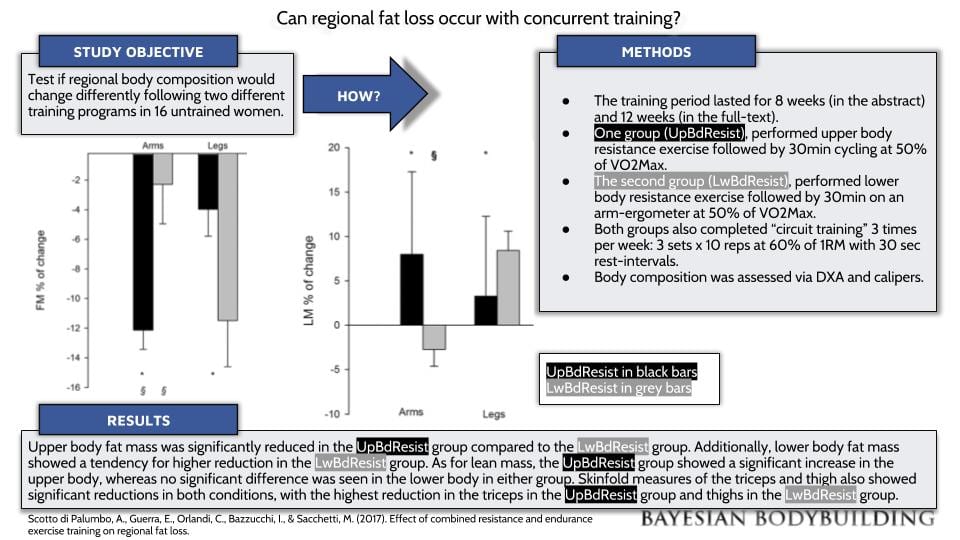 Spot reduction is also reported after application of certain pharmaceutical injections and ointments [1, 2], though you probably don’t want to put much stock in any of the commerically available ‘fat loss creams’.

In support of the low magnitude of spot reduction under other circumstances, tennis players generally have 1 arm that is more muscular than the other, yet that arm is not leaner. For spot reduction to become meaningful, the following conditions are likely needed.

The muscles near the fat regions where spot reduction is desired probably need to be exercised with heavy loads (> 70% 1RM) to promote a sufficient increase in body part temperature, blood flow and hormone delivery. Strength training may be required, so note that muscle hypertrophy will increase the size of these muscles.

So if you’re a man that wants a slimmer midsection, heavy ab work may be counterproductive if the muscle growth thickens your obliques to a greater extent that you induce spot reduction of the abdominal fat mass.

For women, heavy triceps work to spot reduce the upper arm fat may be similarly counterproductive if no arm muscle growth is desirable.

Just doing the spot reduction work isn’t enough. You have to follow up with more exercise to burn the mobilized fatty acids and translate the spot lipolysis into actual spot reduction. Cardio or something like full-body strength training are good options. For cardio, note that you have to balance the negative interference effect with any benefit of spot reduction.

3. An overall state of energy deficit

However, the above 3 conditions, combined with the interference effect from cardio and the often undesirable growth of the waist from too much ab training, seriously limit the practical applicability for most male bodybuilders that desire maximum muscle growth and leanness in every part of the body. Other populations may find more practical applications though. For example, if you’re a woman that doesn’t want bigger pecs, it is another reason not to train them, as it could decrease breast size when cutting. Men with a slim midsection that do cardio or aerobic sports could do heavy ab work before the endurance training to spot reduce the abs.

In conclusion, spot reduction may not be a myth after all.

Interested the latest science on exercise and nutrition? Have look at the online Henselmans PT Course.