I’m always looking for advanced training techniques to maximize muscle hypertrophy. Most have pros and cons and are only situationally effective, so I was excited to see there’s a new study by Evangelista et al. (2019) finding increased muscle growth with an inter-set stretching technique. Here’s my review of the study.

2 Groups of men were compared. The conventional group did a conventional full-body strength training program twice a week: 4 sets at 8-12RM with 90 seconds rest in between sets. The inter-set stretching group did – you’ll never guess – inter-set stretching in between sets. After each set, they performed a 30 second static stretch to their pain threshold. Nothing too hardcore but serious static stretching. See the programs and stretches below if you’re interested in the details. 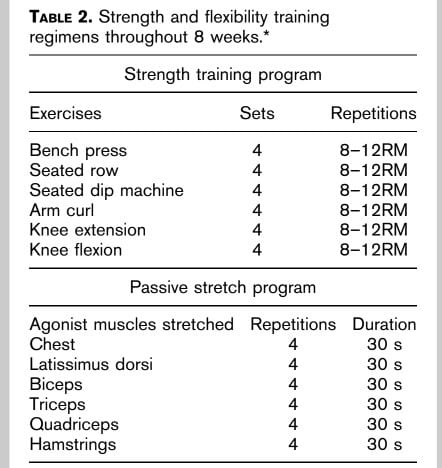 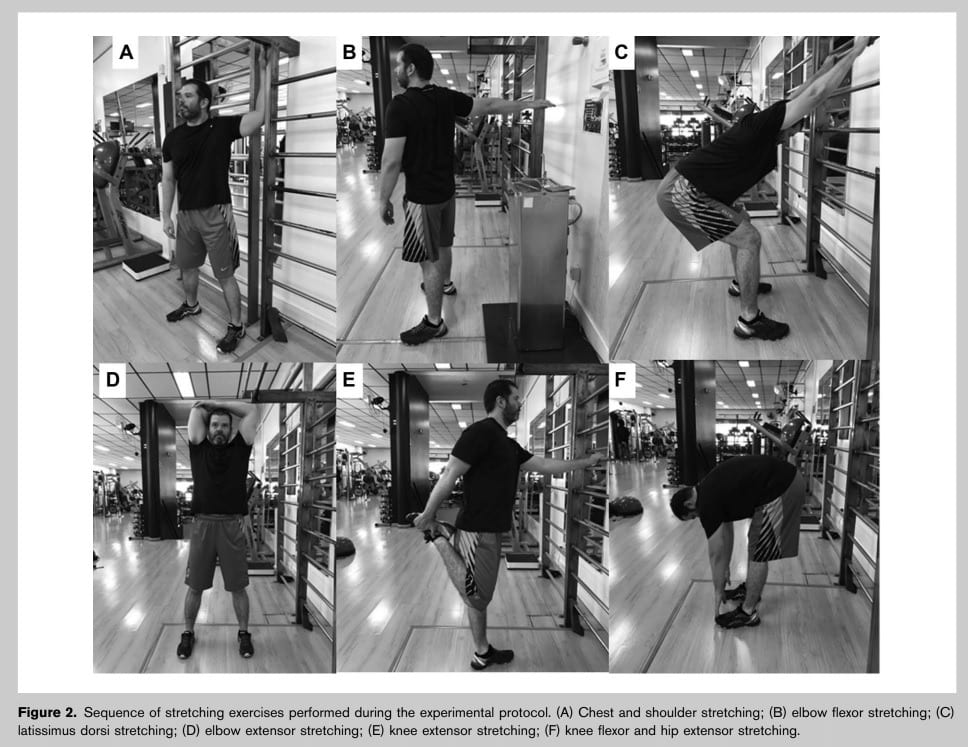 The following table shows the results after 8 weeks. Strength gains were similar between groups, but the inter-set stretching group gained more muscle across the board. The difference did not reach statistical significance between groups for any muscle, but the group-by-time interaction was significant for the vastus lateralis of the quads and the total sum of muscle thicknesses. This shows the total muscle growth rate occurred faster in the inter-set stretching group.

While these results are very promising, there are several reasons why I remain skeptical of the benefits of inter-set stretching.

In the new study, repetitions were equated between groups. Assuming the static stretching reduced strength, that would mean the inter-set stretching group was training harder to complete the same workload, and that may be the reason they gained more muscle. The authors said the programs had progressive overload, but this is incompatible with equated reps between groups, a common problem in exercise science I’ve discussed before. For serious strength trainees that push for maximum progress, the stretching would hurt performance and they’d therefore achieve lower workloads, which would likely reduce rather than increase muscle growth.

Third, even if the stretching intensity was sufficient to stimulate muscle growth, this may not work in trained individuals. The participants in the new study were untrained. This is not just a limitation for their motivation level but also physiologically. Muscle growth can occur in 2 ways: the muscle can lengthen from the addition of sarcomeres in series or the muscle can thicken from the addition of sarcomeres and whole myofibrils in parallel. Thickening is the primary growth mechanism in trained individuals, as a muscle can only lengthen so much. With full ROM training, you probably tap out the potential for substantial increases in muscle fascicle length quite soon. While muscle thickness and not length was measured, it’s possible that in the new study, much of the increased muscle size came from the addition of sarcomeres in series, as lengthening is a primary adaptation to overstretching. This would likely not be relevant for trained individuals already training each muscle with exercises imposing high tension at long muscle lengths during eccentric contractions.

In conclusion, this is a very promising study, but I generally don’t recommend inter-set static stretching yet.

Interested in more effective advanced training techniques to maximize muscle hypertrophy? I discuss which ones work and which don’t in my upcoming online PT Course.