Life is full of choices. You want alcohol and you want gains, but alcohol hurts your gains. To decide if alcohol’s worth it for you, you need to know how bad the damage is. We did the research. Here’s the answer.

As with any good story, we should start at the beginning. And just like life itself, the story of alcohol and muscle growths starts in the male testicles.

Alcohol & testicles: not a love story

Alcohol can also increase the conversion of testosterone to estrogen in the liver [2], which leaves less of it in circulation. 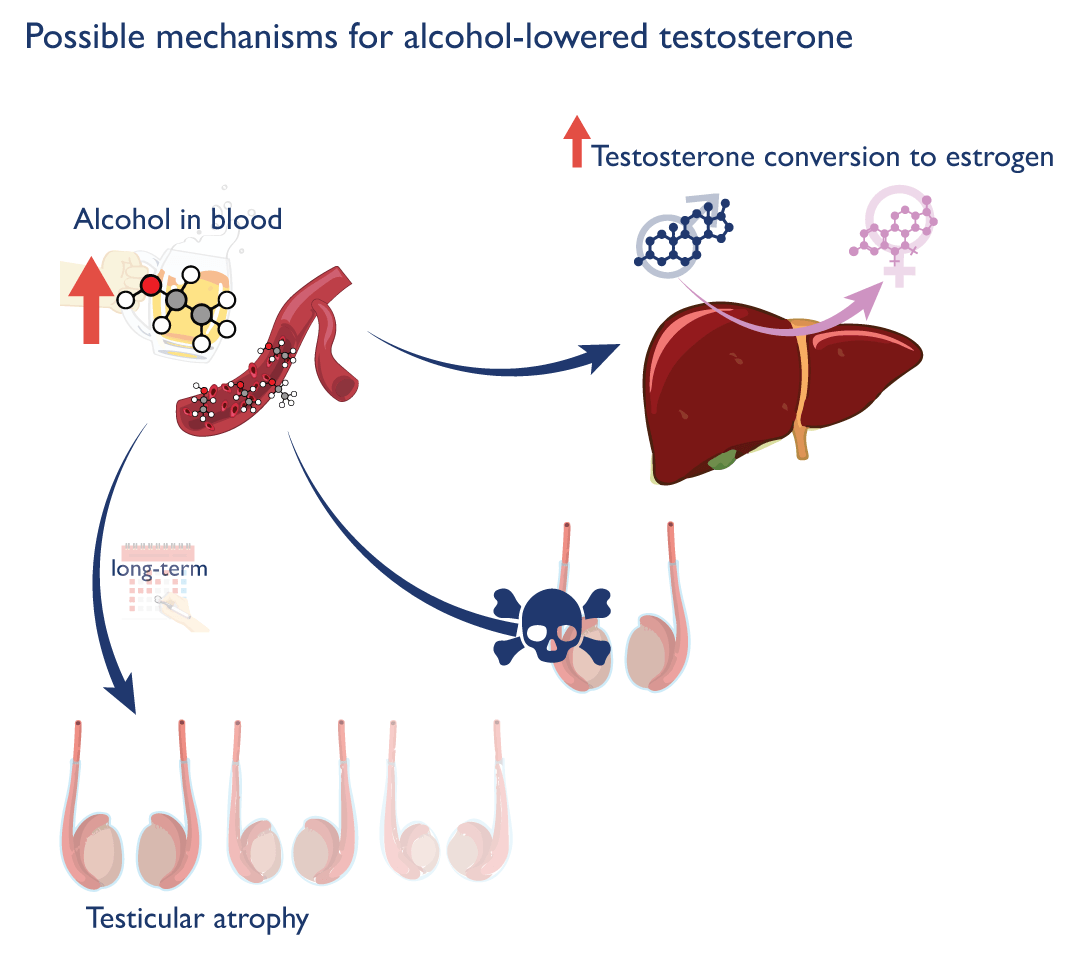 If you’re male, alcohol is toxic for your balls and can cause more of your testosterone to be converted into estrogen.

In contrast to what you’d expect based on the above effects, light drinking of around 1-3 US drinks increases testosterone levels in the hours thereafter [2]. However, before you start mixing your post-workout whey in whiskey, this is only a transient benefit, as the effect reverses over time with chronic consumption and higher doses of 4-8 drinks will lower testosterone levels by 18 to 40% [2, 3]. Your testosterone normally recovers within a day from this kind of cocktail party [2, 3].

If you get yucky with the boyz or girlz fo’ real, the damage can be much worse. A drinking spree of 9+ US glasses of alcohol may instantly tank your testosterone levels by 45%. The next day there may still be a 23% dent in your manly hormones. This level of decrease in testosterone is comparable to being in contest prep for male natural bodybuilders: see the infographic below. 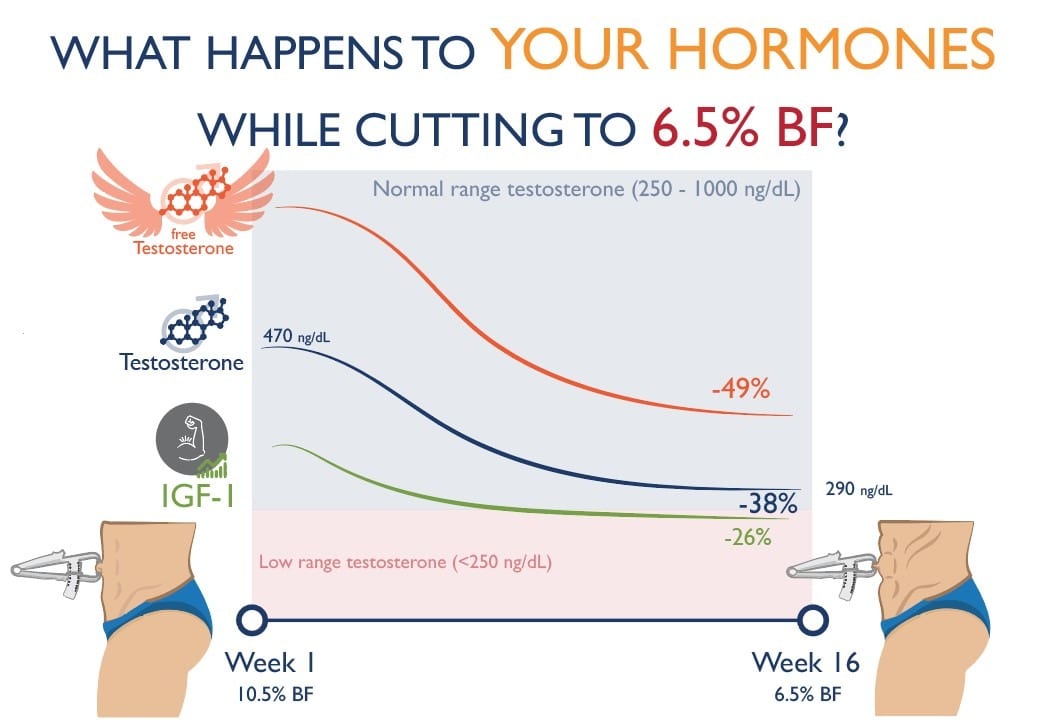 The acute effects are comparable to the chronic effects of daily alcohol consumption: see the following research summary. Up to a few drinks a day will have a small effect on your hormones with a less than 10% decrease in testosterone. When you get into the double digits on a daily basis, testosterone levels drop by a considerable 25-55%, but it’s safe to say you have more serious issues than your gains at this point. (If you do, you can seek treatment for addiction here.)

The negative effect of alcohol consumption on testosterone levels in men.

On a side note, if you love running to the bar after work: doing exhaustive cardio before binge drinking may further prolong the depressing effects on testosterone.

A decrease in testosterone is obviously not desirable in general, but how exactly does this affect muscle growth? Testosterone tells your muscles to grow via the mTOR signaling pathway in your muscles [2]. Since alcohol decreases testosterone levels, it then shouldn’t be a surprise that alcohol decreases mTOR kinase activity, a key enzyme that integrates signals for muscle growth [2, 3]. It then also shouldn’t come as a surprise that muscle growth itself is impaired after alcohol consumption. Specifically, 9 servings of alcohol post-workout decrease myofibrillar protein synthesis (MPS) by 24%.

Alcohol’s effects on testosterone, mTOR and MPS are comparable to its effects on recovery after exercise but less bad, at least acutely. Light drinking up to 3 US consumptions doesn’t seem to affect recovery from even very muscle-damaging exercise at all. At around 4 US consumptions we still see no consistent effects on  strength recovery, but we do see the decrease in testosterone. Higher doses of 6 US servings of alcohol post-workout resulted in 11-19% worse strength decrements compared to drinking orange juice. Overall, alcohol’s acute effects on recovery are surprisingly mild, but the long-term effects from impaired protein synthesis and hormone production are likely worse if you drink often.

No balls? No problem!

Alcohol is commonly regarded as being just as bad for women as for men. However, the hormonal problems of alcohol in men all start because alcohol is toxic for the testes. Women don’t have testes (citation needed?). So, why would alcohol be bad for women’s hormones?

Alcohol is also good for estrogen levels. And in contrast to common belief, estrogen is beneficial for muscle growth, especially in women. Light drinking doesn’t have much effect, but 4-7 drinks can increase estrogen acutely by up to 66% [2, 3, 4, 5]. In the long term, drinking at least 5 glasses of alcohol per week is associated with higher overall estrogen levels in women [2, 3]. Other research finds it’s testosterone rather than estrogen that’s positively associated with drinking 2-3 glasses of alcohol per day. The following infographic summarizes the literature on the relation between alcohol consumption and estrogen levels.

The effects of alcohol consumption on estrogen levels in women.

If this sounds too good to be true, there is a big caveat: these increases in sex hormone levels may be good for your gains, but they are related to liver toxicity that causes a disruption in hormonal metabolism. So they’re not good effects in a healthy sense.

Since alcohol is actually good for testosterone and estrogen levels in women, does alcohol still reduce mTOR signaling for muscle growth?

Nope. As you can see in the infographic below, several shots of vodka directly post-workout majorly decreased mTOR activation in men but not in women. 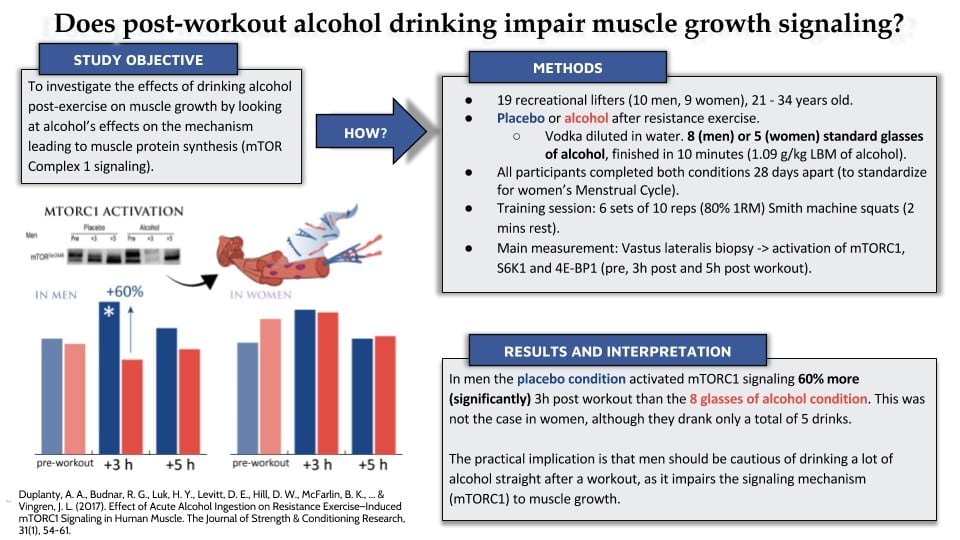 However, it’s possible that muscle protein synthesis (MPS) is still hampered by alcohol in women due to negative effects downstream of mTOR, such as protein translation efficiency. Female rats suffer a decrease in MPS after acute alcohol consumption similar to male rats. However, chronic alcohol consumption only decreased muscle protein content and synthesis in male rats, not female rats.

Women also seem to have inherent protection against alcohol’s detrimental effect on recovery after training. In contrast to men, up to 6 US servings of alcohol post-workout don’t seem to affect the muscular recovery of women [2].

In men, alcohol reduces testosterone production because alcohol is toxic for the testicles. This effect corresponds to reduced anabolic signaling, muscle protein synthesis and muscular recovery. The damage greatly depends on the dose of alcohol you consumed. A single glass of wine will do basically zero damage. Up to a few drinks a day, the damage is still small, arguably trivial. A night out of partying will affect muscle growth similarly to if you were cutting in contest prep: while you can still make gains that day, it’s much more difficult.

The kind of night where you get completely wasted, end up at a stranger’s house, get asked the next day if you’re this person on Youtube and you have to watch the video on mute because even after taking 4 painkillers you can still hear yesterday’s beat in your skull, that day is definitely wasted in terms of your gains. The next day probably won’t be great either. Even then though, you can most likely still build muscle and strength the rest of the week.

Women, by virtue of not having testicles, seem to be mostly exempt from alcohol’s gain-robbing effects. Their testosterone and estrogen levels actually increase, there seems to be no reduction in anabolic signaling and muscular recovery seems to be unaffected even after hefty post-workout drinking. There might still be an acute decrease in muscle protein synthesis after binge drinking though due to a negative effect of alcohol on protein translation, but moderate long-term usage seems to be gain-friendly. 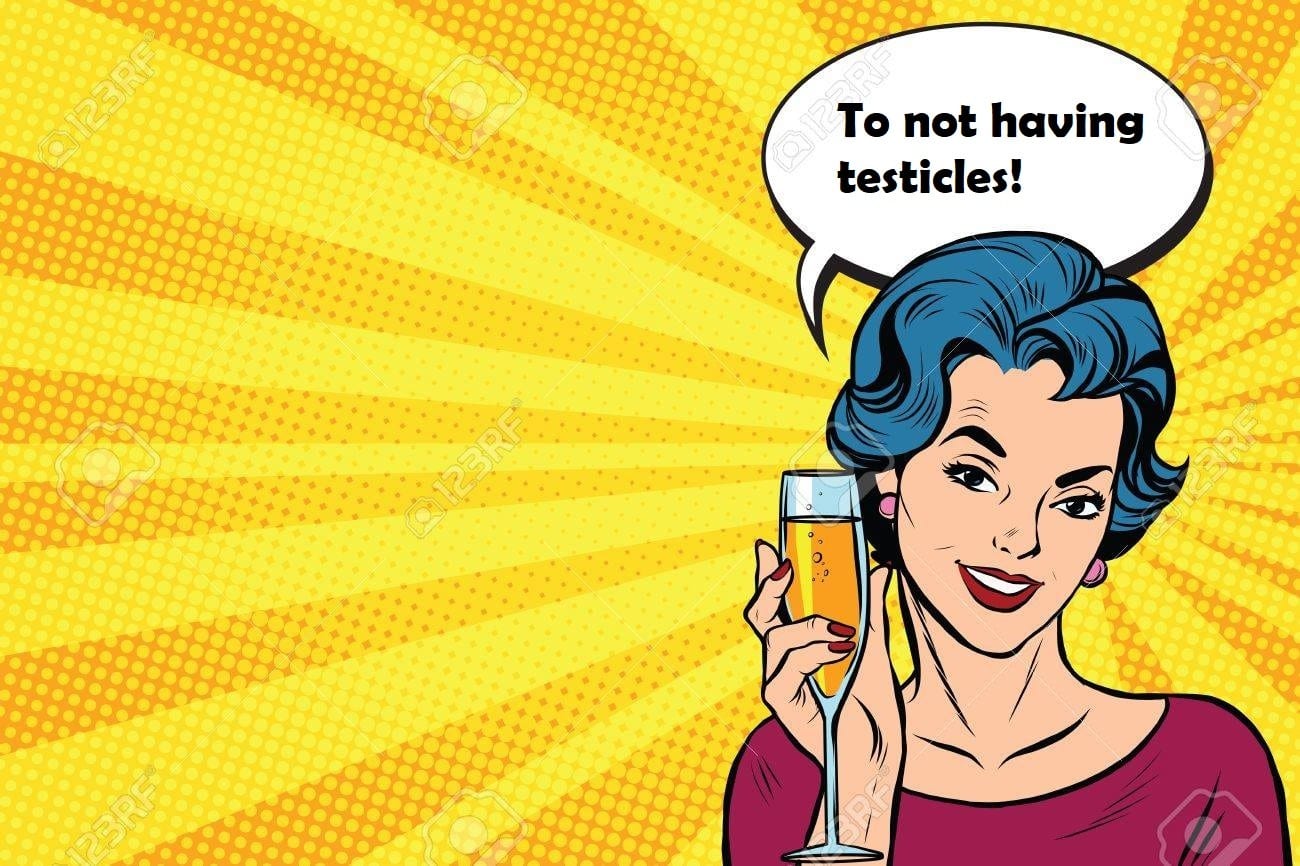 For how alcohol affects fat loss and how to minimize the damage of a night out, read our scientific guide to binge drinking. 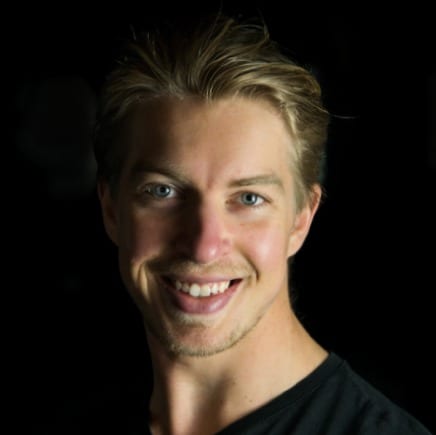 Stijn has a BSc in Kinesiology and has been working on the Henselmans team as a content editor and researcher for over 2 years. He is also an online coach, writer, and entrepreneur, having launched his own meal planning algorithm. You can find more about him on his website www.bodylogiq.org or his Instagram (www.instagram.com/stijnvanwilligen) where he posts tons of infographics on science.

How many carbs do you need for maximum gains? A systematic review
How many grams of carbohydrate should a strength trainee consume per day to fuel their training... Read More »