I’ve written and talked about training to failure many times before, but this new study by Carroll et al. (2018, 2019 – same study split into 2 publications) provides highly relevant new data.

To sum up the previous research, training to failure hasn’t performed very well in the literature. It adds a lot of fatigue but little extra muscle growth and next to no extra strength development. However, previous studies were done almost exclusively in untrained individuals. That novice level trainees don’t need to train to failure yet is not too surprising.

An untrained individual can gain muscle from riding a bicycle, literally, so that they don’t have to crank out that last rep of squats doesn’t exactly mean it can’t be beneficial for a well-trained individual. The participants in the new study were mostly American football players I presume, as the researchers compare their strength level in the isometric mid-thigh pull peak force (‘the power position’ for Olympic weightlifting) to competitive American football players. Their average lifting experience was ~8 years training 3+ times per week and they had a BMI of 27.

The researchers randomized the big guys into 2 groups. The programs were identical and equated in repetition volume with only 1 difference between the programs: the repetition maximum (RM) group always trained hard and took the last set of every exercise to failure. The relative intensity (RI) group trained with weights 65-92.5% of maximum effort. See the image below for the full training programs if you’re interested. 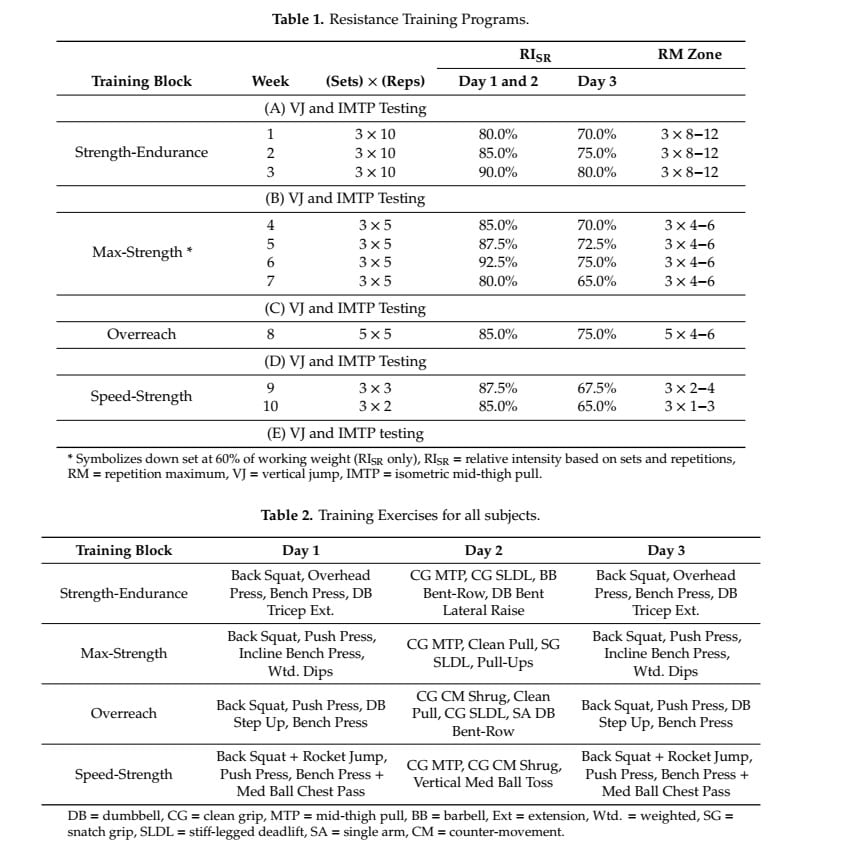 What do you think did the extra effort achieve?

The results were striking. The RM group training to failure achieved worse results across the board. While only some strength performance measures differed statistically significantly between groups, the submaximally training RI group achieved significant improvements in virtually all measures, whereas the RM group didn’t achieve significant results on many measures.

The conclusion here is straightforward. This study in well-trained men confirms previous research that training to failure is rarely worth it and may even be harmful in higher-volume programs.

It adds a lot of fatigue for minimal extra muscle stimulation. For strength in particular, training to failure appears more likely to be harmful than helpful, probably because failed reps themselves are ‘junk volume’ for strength, as they inherently have poor technique. Moreover, the major neuromuscular fatigue they cause can reduce the effectiveness of the rest of your workout.