How many grams of carbohydrate should a strength trainee consume per day to fuel their training sessions? Over the last few decades, most authors have recommended high carbohydrate intakes for strength trainees such as bodybuilders and powerlifters, because carbs, specifically glycogen stored in our muscles, are the primary fuel substrate for high-intensity muscle contractions. High carb diets weren’t always this popular though. Low carb diets, even ketogenic diets, have been very popular at numerous times throughout history for bodybuilders. Let’s look at what the science says. Together with Thomas Bjørnsen, Richie Hedderman and Fredrik Tonstad Vårvik, we conducted the first systematic review on the effect of carbohydrate intake on resistance and strength training performance. It was published in the scientific journal Nutrients. It’s 45 pages of very dense information, so here I’ll give a more lay-friendly summary of our findings.

All reviews thus far have been narrative reviews, which allow authors to pick their own references. We scoured the entire scientific literature for studies that compared different carbohydrate intakes and measured strength, resistance training or power either acutely or after a diet and strength training program. 49 Studies met our inclusion criteria. We divided these into 4 categories:

Here’s what we found.

In total, 11 of the 19 acute studies found no significant effect of carbohydrate intake on strength training performance. Three published abstracts also found no benefits of consuming higher carb intakes on total workout performance. Of the eight studies with a significant between-group effect, 2 favored the lower-carb group, interestingly, and 6 favored the higher-carbohydrate condition. In the latter studies favoring higher carbs, the higher-carbohydrate conditions also had a higher energy intake. In fact, the low-carb group was often training after an overnight fast. None of the isocaloric (calorie-equated) comparisons found the higher carbohydrate condition had greater performance than the lower carbohydrate condition. In other words, all studies supposedly finding benefits of higher carb intakes were confounded by a higher energy intake. They may have performed better not because they had consumed more carbs per se but simply because they had consumed more energy, regardless of which macronutrient that came from.

Why does carbohydrate intake not affect performance in most studies? Because you just don’t burn that much glycogen in 1 workout. Moreover, you’re generally resting much more than you’re training in the gym. If you do a set of 30 seconds and then rest 3 minutes, you’re only training 17% of your workout. These rest periods allow the aerobic system, which can be fueled by fatty acids rather than carbohydrates, to contribute a considerable portion of the workout’s total energy expenditure: estimates range substantially from 20% to 70% of resistance training energy expenditure. Moreover, many sets are short enough that the creatine phosphate system, relying on creatine and stored ATP, can contribute approximately 16% of energy demands of a set of high-intensity resistance training, with 31% contributions being possible with shorter-duration anaerobic efforts. Even assuming the lowest reported contributions of the aerobic and creatine phosphate systems, 20% and 16%, respectively, thereby assuming a 64% glycolytic contribution, and assuming a hypothetical but realistic strength training session energy expenditure of 500 kcal, this would require 80 g carbohydrate to fuel. Assuming 500 g glycogen storage in a typical athlete, this would theoretically amount to only 16% glycogen depletion. Indeed, the highest reported glycogen depletion level in the literature for traditional strength training is only 39%. Glycogen depletion only starts affecting neuromuscular functioning when levels are reduced to approximately 250–300 mmol/kg dry weight, which generally requires a depletion of over 40% from baseline, depending on the pre-exercise levels. Thus, resistance training workouts generally likely do not deplete enough glycogen to impair performance. For example, Essén-Gustavsson and Tesch found 28% quadriceps glycogen depletion in bodybuilders after 5 sets each of front squats, back squats, leg presses and leg extensions to failure at ~12 RM.

However, for very high-volume workouts, it’s possible that some of the type II muscle fibers reach levels of glycogen depletion that impair performance. Specifically, higher carbohydrate intakes may be beneficial for very high-volume workouts with 11 or more sets per muscle group. While you probably shouldn’t be doing such workouts anyway, positive effects of higher carbohydrate intakes were more consistent in higher training volume workouts. In studies with performance tests consisting of more than 10 sets per muscle group, significant positive effects of higher carbohydrate intakes or a trend thereof  were observed in three studies, whereas only one study found no significant effects. Again though, none of the studies favoring higher carb intakes were isocaloric. Out of 14 studies with lower-volume performance tests (up to 7 sets per muscle group), three studies significantly favored the carbohydrate conditions, yet two favored the lower-carbohydrate conditions. In other words, if you do up to 7 sets per muscle group, it’s very unlikely you need more than 15 grams of carbs pre-workout, but if you go up to 11+ sets, you may benefit somewhat from higher intakes. You’ll benefit more from designing a more effective, higher-frequency training program though. 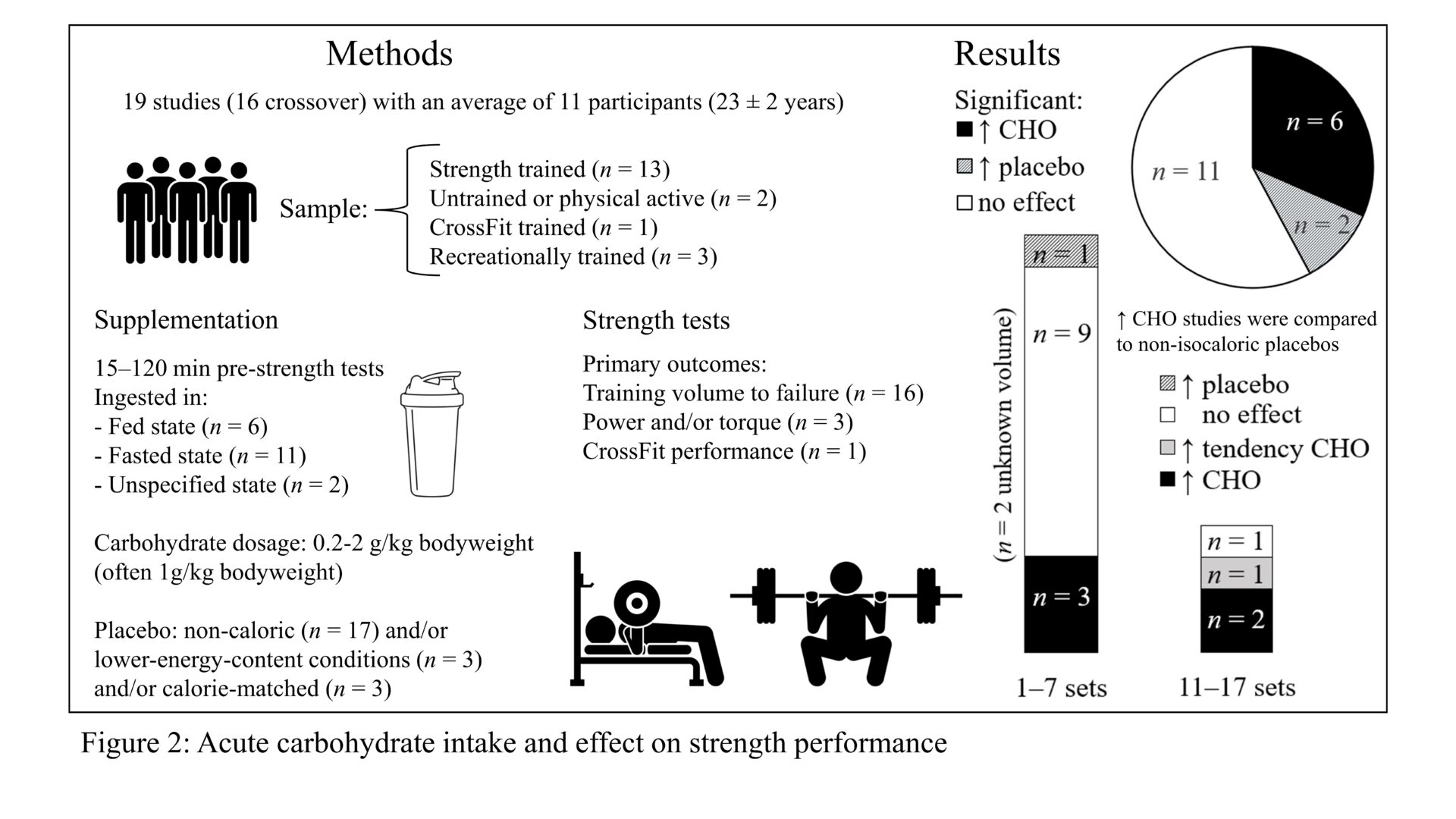 Effect of carbohydrate intake on performance after glycogen depletion

In these studies the participants first performed a glycogen depletion workout, usually consisting of extremely exhaustive bicycling interval training, after which they consumed a lower or higher carbohydrate intake and then performed another workout up to 48 hours later. In this dire context, there was more evidence in favor of higher-carb diets, but still only half the papers favored the higher-carb groups and again in all these papers the higher-carb groups also had a higher total energy intake. The only calorie-matched experiment by Mitchell et al. found no significant between-group differences in total training volume during 15 sets of quadriceps strength training (5 sets each of squats, knee extensions and leg presses) at 15 RM repetitions failure. The glycogen depletion workout consisted of bicycling followed by 48 hours with carbohydrate intakes of only 32 g/day (ketogenic) vs. 643 g/day. Lack of isocaloric comparisons is particularly confounding in studies with prior glycogen depletion workouts, because the extra carbohydrate/energy intake may not just aid glycogen resynthesis but also neuromuscular recovery. Glycogen depletion workouts are by nature exhaustive and generally a novel stimulus, so they have the potential to induce significant muscle damage and neuromuscular fatigue that may take over 48 h to recover from.

There was again no trend for a dose-response effect of carbohydrate intake, nor did the training volumes of the workouts seem to matter in these studies. 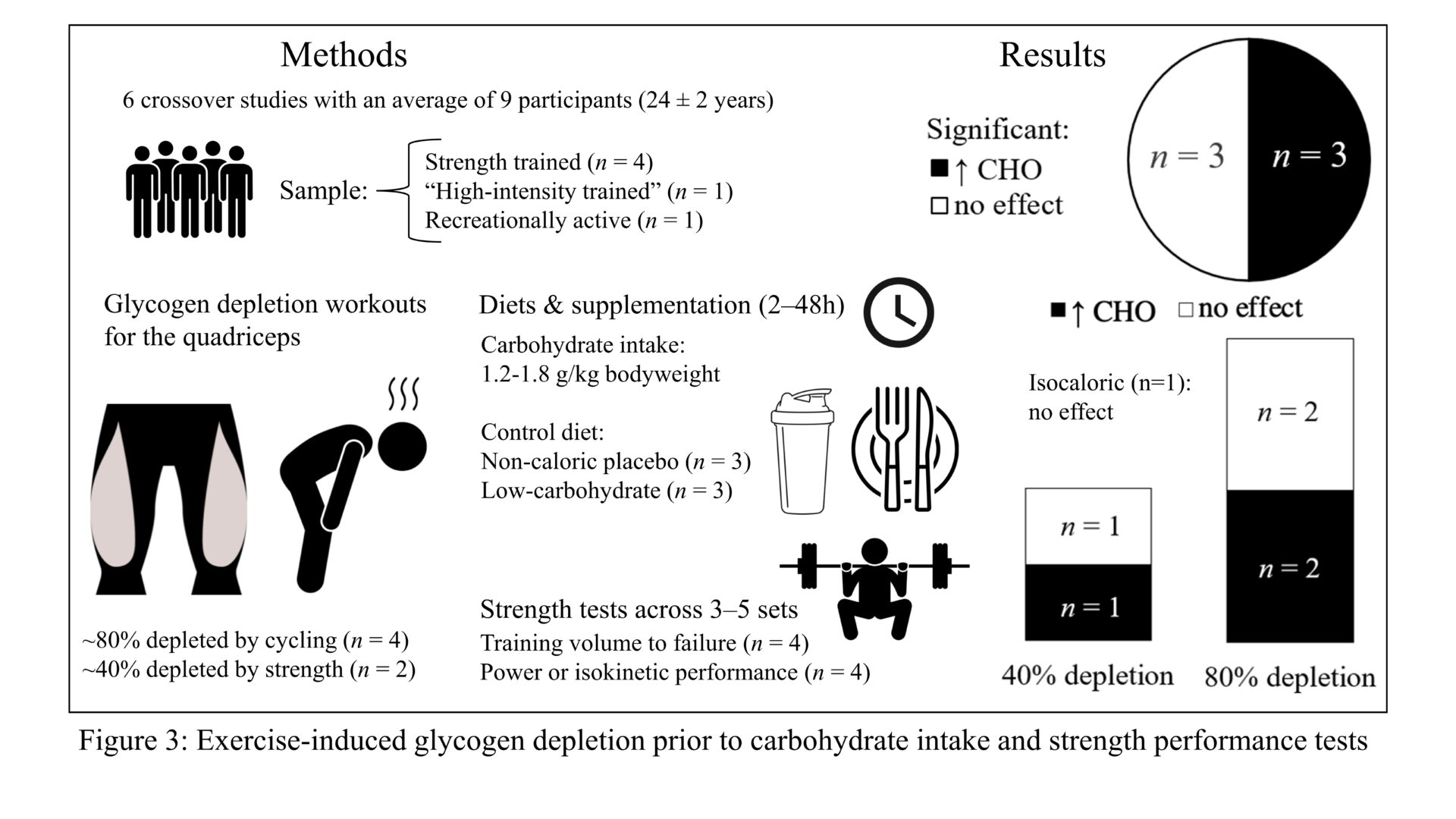 In this category, our results were extremely clear. None of the 8 studies (7 published and 1 abstract) found benefits of higher carbohydrate intakes on strength training performance. For example, Moura et al. observed that two days of a high-carbohydrate refeed (672 g/day) did not increase repetitions across 10 sets of leg presses with only 30 seconds rest in between sets in enhanced bodybuilders, compared to 2 days of energy deficit with a lower carbohydrate intake (231 g/day). One paper actually favored the lower-carbohydrate intake. 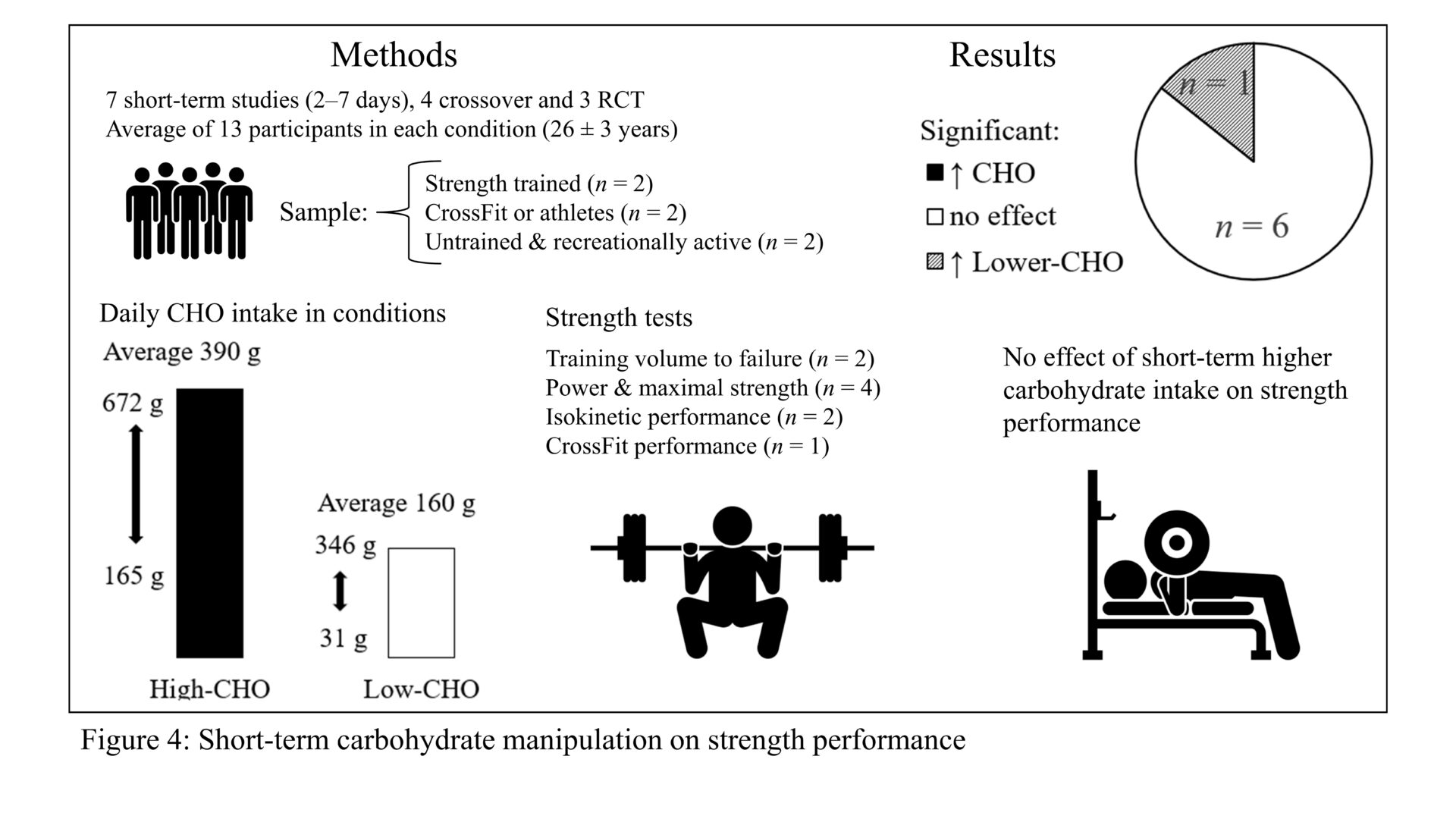 The studies on how carbohydrate intake affects strength development were again very clear. 15 Out of 17 studies found no effects of carbohydrate intake, including all studies in which protein and calorie intake were matched between groups. Bodybuilders, powerlifters, taekwondo athletes, CrossFitters, they all gained just as much strength even on fully ketogenic diets as on high-carb diets. The other 2 studies reported conflicting results.

The reason for the lack of long-term effects of carbohydrate intake is that your body is very good at resynthesizing your glycogen stores in between workouts.

Even for the glycogen depletion amount of the study with the highest reported depletion in the literature after traditional resistance training, 39% or 46.6 mmol/kg, this would require an average glycogen resynthesis rate over 24 h of 1.9 mmol/kg/h for full recovery. This is on the lower end of the range of glycogen resynthesis rates (1.9–3.7 mmol/kg/h) found in fasted individuals. Thus, unless you train twice a day with high training volumes, your muscles can generally replenish your glycogen stores in between workouts even on very low-carbohydrate, ketogenic diets.

There is also evidence from endurance training research that low-carbohydrate diets induce muscular adaptations that reduce the reliance on glycogen during exercise. 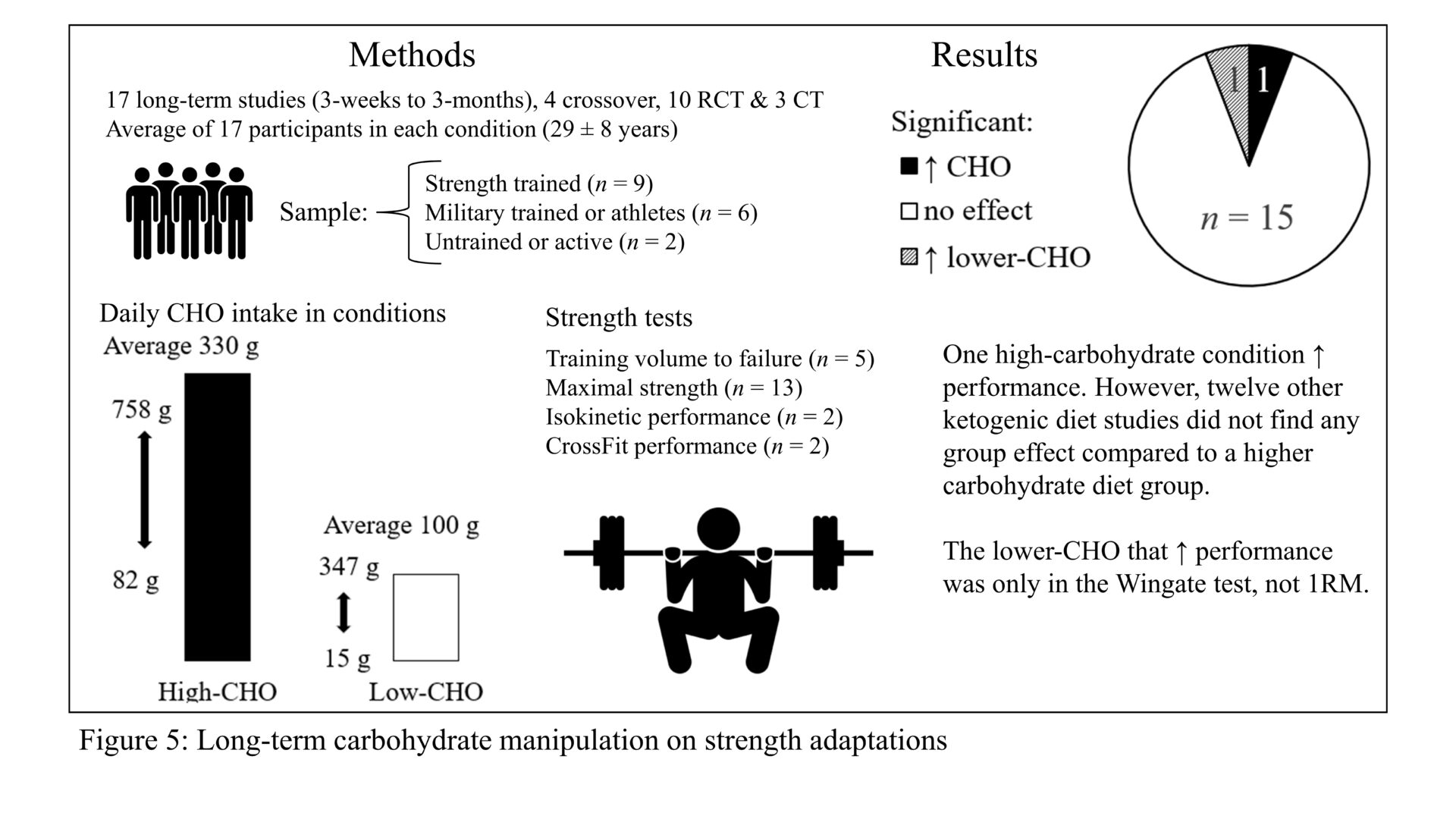 Fifteen of the studies also estimated or measured fat-free-mass (FFM) or muscle thickness. Most of these studies found no significant between-group differences in these measures or body composition and thereby presumably muscle mass, in line with the lack of differences in strength development. 5 Studies found a between-group difference favoring the higher-carbohydrate condition; however, they were likely all confounded by greater energy intakes in the higher-carbohydrate groups, as the lower-carbohydrate conditions had more favorable changes in fat mass.

Greater energy intakes have been found to improve muscle growth. Thus, the overall literature does not support lower-carbohydrate diets impair muscular development when accounting for energy intake and glycogen storage levels. However, from a practical standpoint it seems more challenging to consume a target energy surplus in ketogenic diets, possibly due to the appetite suppressive effect of ketogenic diets.

The majority of 39 out of 49 studies, including all 16 isocaloric comparisons, in addition to 4 published abstracts, found no significant benefits of higher carbohydrate intakes on strength training performance. 10 Out of 15 studies also found no effects on muscle growth; the other 5 were confounded by higher energy intakes in the higher-carbohydrate groups. Let’s emphasize that: there’s literally not a single high-quality study that shows benefits of higher vs. lower carbohydrate intakes on strength training performance. Mechanistically, resistance training workouts up to 10 sets per muscle group are unlikely to sufficiently deplete glycogen stores below the threshold of impairing neuromuscular functioning. Glycogen resynthesis after such depletion may be complete within 24 h even on low carbohydrate intakes via carbohydrate-independent pathways, especially in trainees habituated to that training in low-carbohydrate conditions. Ten studies found that carbohydrate consumption might enhance strength training performance in specific contexts, notably for otherwise fasted training, workouts with volumes over 10 sets per muscle group and bi-daily workouts, but none of these studies had calorie-matched comparison groups. There’s reasonable evidence that fasted training is suboptimal, so we advise that you consume at least 15 grams of (net) carbohydrate and 0.3 g/kg protein within 3 hours of starting your weight lifting sessions. Higher carbohydrate intakes may be beneficial if you train twice a day with high volumes or you do over 10 sets per muscle group per workout.

Interested in more details? You can read the full paper for free here: The Effect of Carbohydrate Intake on Strength and Resistance Training Performance: A Systematic Review. Henselmans et al. Nutrients 2022, 14(4), 856; https://doi.org/10.3390/nu14040856

How much does cutting influence muscle growth and strength gains? [Study]
A new meta-analysis by Murphy & Koehler (2021) finds cutting reduces muscle growth but not strength... Read More »
Home » Posts » Articles
Share via
Send this to a friend