As we age, we lose muscle mass and strength. This weakening with age is formally called sarcopenia: sarx means “flesh” in Greek and penia means “loss” or “low”. Nobody likes it, but it affects all of us, so you’re probably interested in what you can expect as you get older. At what age does sarcopenia set in and how bad is it?

It’s common to hear that in your 30s, everything starts to go downhill. Indeed, most top athletes of popular sports are in their 20s. For example, Olympic Weightlifters on average peak at age 26 [2]. However, the age of peak performance varies dramatically per sport from early 20s to the early 40s. Many top athletes retire not because they’re past their physical prime but because of injuries, drug-related health risks, better career opportunities or simply because they have nothing left to improve and don’t really need to work anymore for the rest of their life.

If we look specifically at sports where strength and muscle mass are the primary determinants of performance, athletes peak considerably later. Powerlifters reach their prime on average at age 35. Research on bodybuilders is scarce, in part because performance cannot be measured objectively, but if we look at the greatest bodybuilders of all time as judged by the Mr. Olympia competition, we can see that they were all in their prime until at least in their 30s.

Lonnie hired me to prep for her first Bikini show at age 40. It turned into a 6-month competitive season with 3 top 3 placings, including being national champion of Denmark. I can vouch that she’s natural, as the reason she stopped competing was that she became pregnant.

How age affects your gains

These data are very much in line with those from scientific research by Lowndes et al. (2009). If we look at muscle growth and strength development after standardized strength training in 18- to 39-year-olds, there is no relation between age and the rate of muscle growth or isometric strength development. Age did seem to affect biceps curl 1RM strength development, but the researchers commented that “Although age was negatively associated with improvements in 1RM, the effect of age was small relative to the improvements induced through resistance training, thus suggesting age does not limit response to training in any practical way during early adulthood.”

But what about after age 40? Is age 40 the end of our prime? The fact top athletes on average are no longer in peak condition could be due to numerous factors other than age: enough money to move on, injuries, loss of motivation, injuries, side-effects from heavy drug use… did I mention injuries? When pushing your body to the limits for years on end in every way possible, it’s a matter of time before you get injured and at the world top, that can already mean the end of your prime.

Another way to look at this question is to see when sarcopenia sets in in the general population. As it turns out, muscle loss in the general population is well modeled by linear decline starting at age… 20. Look at the data below from Melton et al. (2015) and you can see muscle mass steadily decline over time as people get older. There is no ‘breaking point’. It’s slow but constant decay over time. 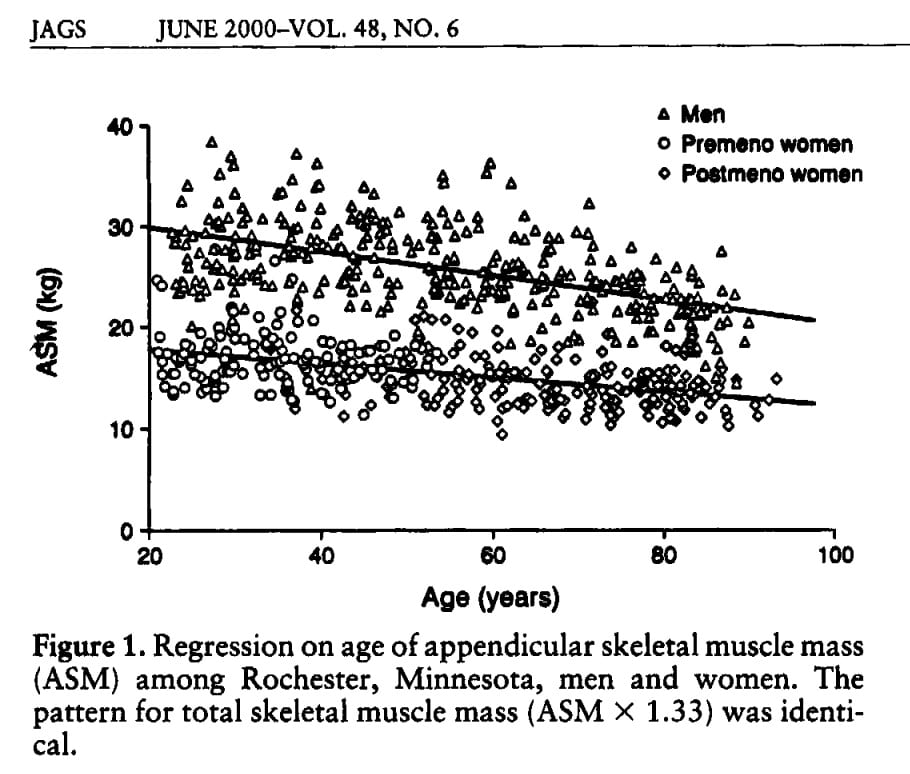 What is going on here? How can sarcopenia set in in our 20s while powerlifters and bodybuilders stay in their prime until age 40 and scientific research shows our rate of gains also stays the same until at least age 40?

It’s because age is not the primary determinant of sarcopenia. Let me repeat that. Sarcopenia is not primarily a problem of age. Muscle biopsies suggest that muscle tissue does not suffer from age per se at all.

Research by Wroblewski et al. (2015) in high-level masters athletes found no significant loss of lean body mass or strength from 40 to 81 years of age in people that kept exercising. Now, if you look at the data, there are some downward trends and these were mostly endurance athletes, not bodybuilders pushing the limits of their genetic muscular potential, but heck, by age 81 most people have already passed away. The authors concluded: “This study contradicts the common observation that muscle mass and strength decline as a function of aging alone. Instead, these declines may signal the effect of chronic disuse rather than muscle aging.” 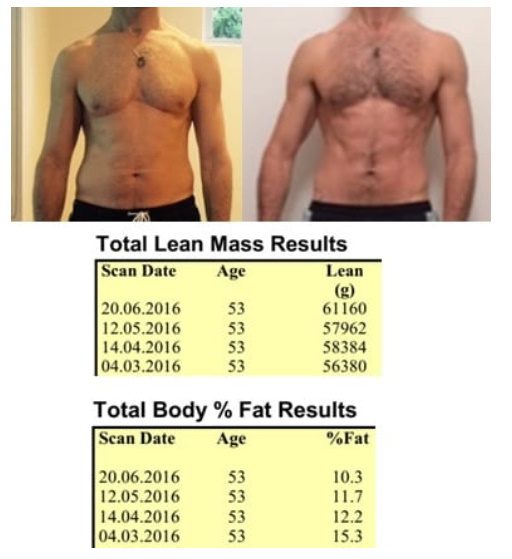 At 53 years old with 7 years of lifting experience, James was looking great compared to the average 50 year old. But we could do better. After switching from a more conventional to a scientifically optimized training and nutrition program, he gained about 10 pounds of muscle while dropping from 15% to 10% body fat in under 4 months, as shown in 4 DXA scans over time.

Multiple scientific studies support that age per se is not the major cause of frailty in the elderly and does not affect our gains nearly as much as most people think. 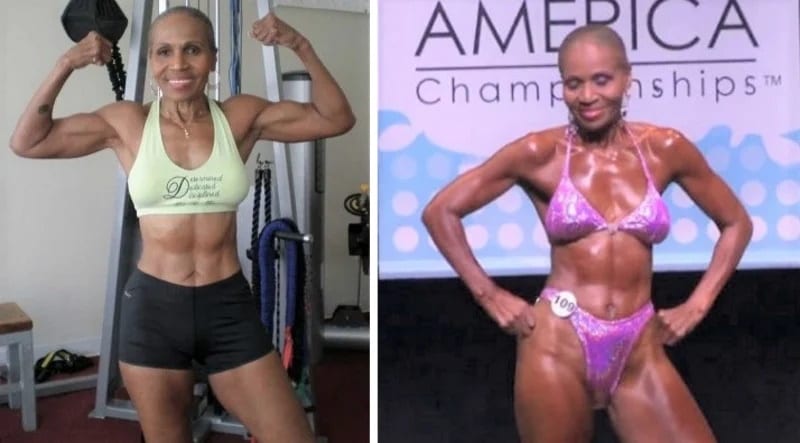 Based on these data, you may wonder if there’s even any evidence at all that age reduces our muscular potential, but there is. A 2020 meta-analysis by Straight et al. concluded that when we look at all available studies, muscle growth from strength training does diminish after age 60. Age only explains about 10% of the variance in muscle growth, which explains why most individual studies don’t find significant effects of age.

What about fat loss? 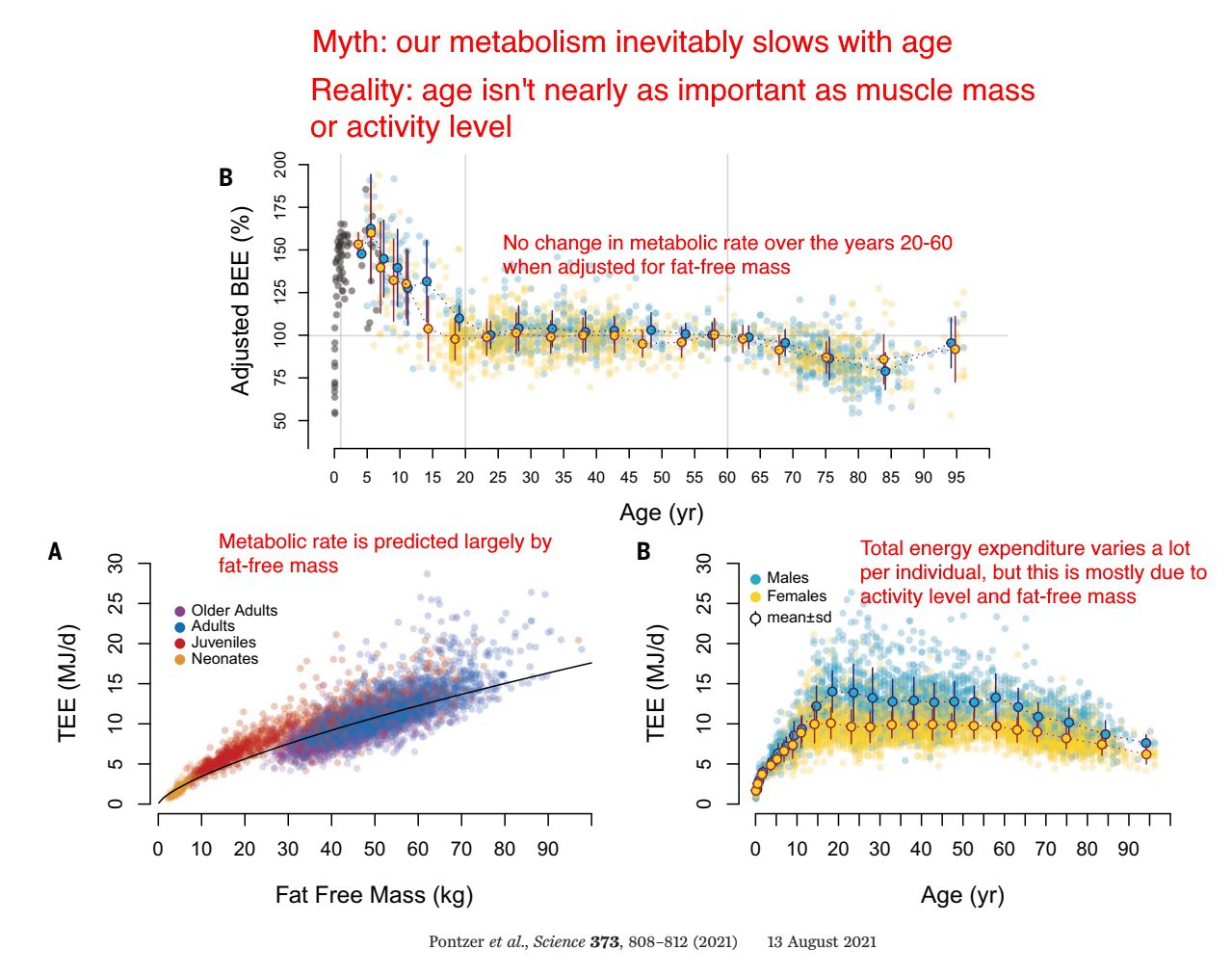 It’s never too late to start lifting and always too early to stop. While competing with the best of the best in the world may not be realistic anymore after your mid 40s, you can always stay lean and you can likely retain the majority of your muscle mass all the way into your 80s. Exercise is truly a panacea. We evolved to run, hunt, travel, dance, live. Give your body what it needs, stay lean and fit, and it will serve you for many decades for a long and muscular life.