With the popularity of high frequency training, a ton of new research has been done on the best training frequency for muscle growth and strength development. Several of these studies have found no significant difference between lower and higher frequencies under volume-equated conditions (reviewed on this site or my Facebook page). But outside the lab we’re never in ‘volume-equated conditions’. We have a certain amount of time we want/can spend in the gym, often a certain amount of volume we tolerate and the practical question is: how do we distribute this amount of sets across the week?

Everyone but the most bro of bros agrees by now that most people should train a muscle at least twice a week for maximum growth. The debate currently mostly centers on if training frequencies of 3+ per week are beneficial. A new study by Zaroni et al. (2018) involving my esteemed friend Brad Schoenfeld investigated exactly this in their paper titled: High Resistance-Training Frequency Enhances Muscle Thickness in Resistance-Trained Men.

18 Decently strength trained men – their average bench press exceeded 4 plates (over 100 kg) – were randomized to a program that trained each muscle either 5 times with 5 full-body workouts or once or twice with a bodybuilding split. The authors said that the split program trained each muscle group once a week, but look at the programs below. In red I commented on what was trained. The authors neglected that pull day trained the biceps and push day trained the triceps. So for the arms the comparison was a training frequency of 2x vs. 5x. 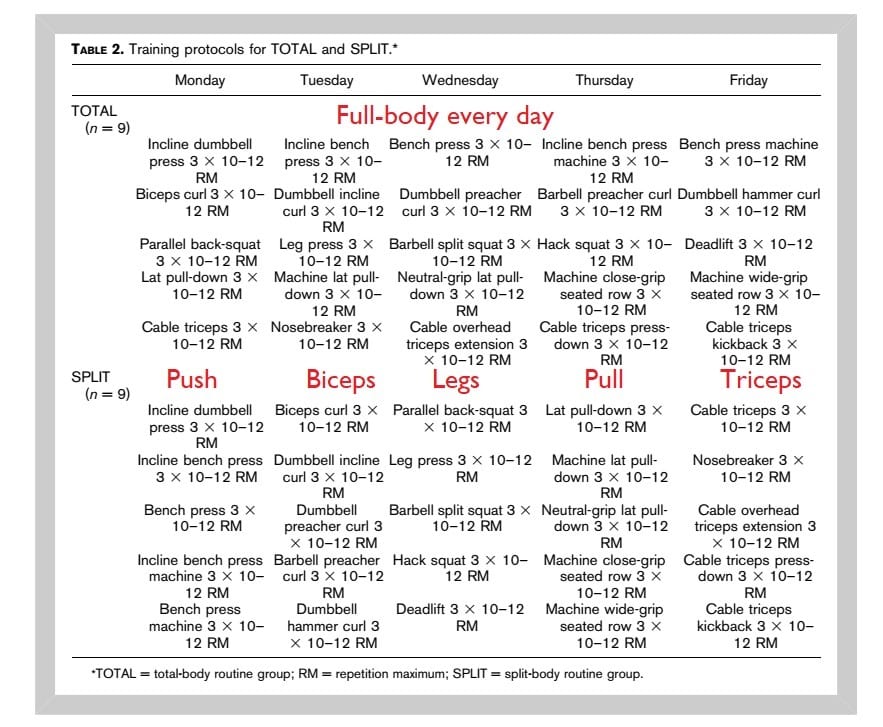 As you can see, the amount of sets per week, the exercises and the average intensity (RM) were exactly the same between groups. Both groups performed all exercises to failure (supposedly: I’m always extremely skeptical of this claim by researchers. Split squats and deadlifts to failure? I don’t think so.) Macronutrient intakes were also the same in both groups.

Here are the results. The full-body group had a greater increase in muscle thickness of the forearm flexors (biceps, in bodybuilding terms) and vastus lateralis of the quads. The other comparisons didn’t reach statistical significance, but if you look at the graph, it’s clear the results for the triceps also trended in favor of the 5x training frequency: they gained almost twice as much muscle. The more than twice as great squat gains for the full-body group are also notable. The legs were only trained once a week in the split group, so it’s possible that the greater strength development in the squat was because squatting once a week just doesn’t cut it for maximal progress.

What explains these substantially greater gains that don’t show up consistently in other research? There are 2 plausible reasons: training volume and training status.

The benefits of high frequency training

The most likely reason I’d say for the greater gains was that the full-body group achieved a significantly greater total training volume in terms of total work (sets x reps x weight).

This is the crucial difference that many people neglect when interpreting training frequency research. Most training frequency studies are work-equated. This one, and your program in real life, aren’t. When you split up a given number of exercises or sets across more sessions, you’ll perform more work. Just think about it: how productive were the hack squats in this program after these guys had done 9 other sets of squats to failure? How much work could they still produce during the seated rows after 12 other sets of pulling exercises to failure? Not very. You’re tanked by that time, so you can’t lift nearly as much weight as you could if you moved those exercises to separate days. As long as you can recover from it, a greater training volume means more mechanical tension on the muscle fibers and that means more muscle growth.

What’s particularly great about high frequency training is that this extra volume doesn’t seem to come with extra fatigue. In this study, internal work load was also measured. This takes into account the session rating of perceived exertion (RPE). It didn’t differ between groups. Other research supports that higher training frequencies may actually be easier to tolerate and recover from.

Combined with the benefits of active recovery, it’s plausible that high training frequencies do not only increase your total volume load but they do so without increasing training stress and may enable you to recover from higher total training volumes.

A second possibility is that highly trained individuals inherently benefit from higher training frequencies, even when these do not result in a higher total training volume load.

This new study is actually perfectly in line with the results of Schoenfeld et al. (2015). This study is commonly cited to show that training a muscle group 3x per week with full-body workouts was better for muscle growth than training a muscle once a week with a split routine. However, here too the authors neglected that the upper body day trained the arms, so the actual comparison for the arms was 3x vs. 2x. For the legs it was 3x vs. 1x as planned. Otherwise the design was very similar to the new study. The subjects also had a similar strength level. There was only one key difference: training volume load was the same in both groups.

The results were, just like the study design, strikingly similar to the new study: biceps and quad thickness increased significantly more for the 3x group. Triceps thickness trended to increase substantially more in the 3x group, but the comparison here too did not reach statistical significance. Strength gains did not differ significantly between groups, but there was a weak trend for greater gains in the full-body group. Here’s an overview of the results.

So we have 2 very similar and well-controlled studies finding substantially greater muscle growth when muscles are trained more than twice a week. Given the similarity of the results, it didn’t seem to matter that volume load was equated in one study and not the other. If not volume, what could explain why higher training frequencies may benefit growth?

Regardless of whether high training frequencies are inherently superior to the common bro splits and upper/lower splits or ‘just’ because they enable you to perform more volume, the practical take-away to me is clear. When several studies find benefits of a training strategy and others show it’s at worst neutral, for maximum gains, you do it. The bro split is dead. Long live high frequency training.