Was Mike Mentzer right all along?
After reading the full text of this study from Iran, I have more questions than answers. This part is clear: they took 20 untrained guys and had half do a traditional training program and half a Heavy Duty protocol for 8 weeks.
These good boys never skipped leg day. In fact, every workout was leg day: 3x per week. With squats. And deadlifts. 5 exercises, 4 sets each, so 60 sets of leg work per week. I’m not sure Mike Mentzer would approve of this training volume…
Regardless, the Heavy Duty group gained about double the increase in anatomical cross-sectional area (ASCA, a measure of muscle size) compared to the traditional group. See the table below.
. 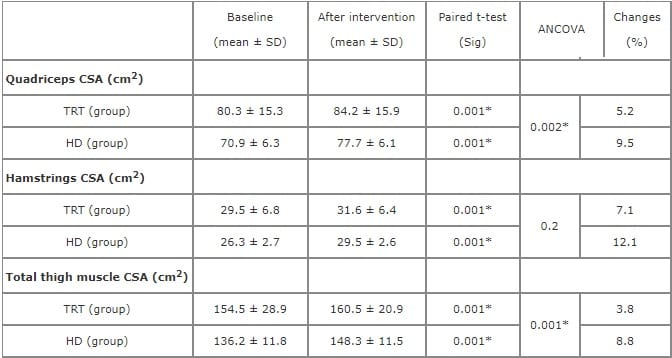 .
ACSA was estimated based on circumference and skinfold measures, which isn’t very reliable, especially when diets aren’t controlled. Before training, the groups were supposedly at 9% and 7% body fat. Untrained. I think not. But the difference between groups was there in hamstrings, the quads and in total thigh size and it was huge, so let’s assume there was indeed a difference between the groups.
In contrast, the traditional group gained more strength on every exercise. See the table below.
. 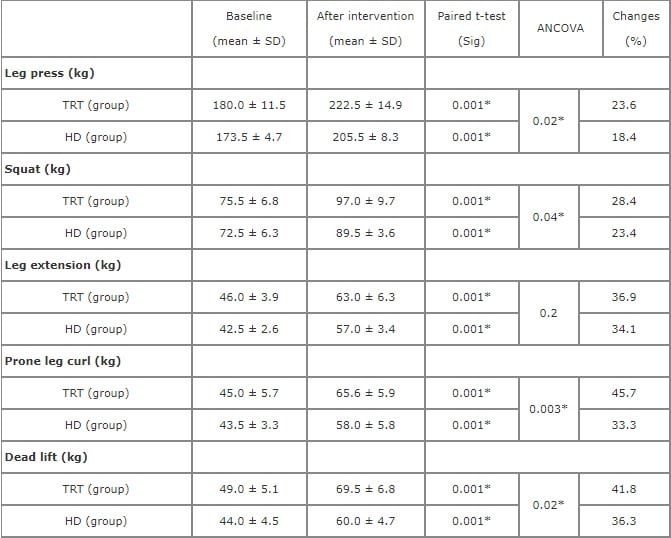 Here’s where things get murky: what was the difference between this amazing new training program and the traditional group? Both groups trained 3x per week for 5-60 mins. Both did the same 5 exercises for 4 sets each. The only reported difference is that the traditional group did 6-12 reps at 70-80% of 1RM with 2-3 minutes rest, whereas the Heavy Duty group did 6-10 reps at 70% of 1RM with only 10 seconds rest. It’s noted that the Heavy Duty group trained with a slow 3-1-3 second concentric-paused-eccentric tempo, but no tempo for the traditional group was reported, so it’s unclear if this differed between groups.
.
So the traditional group used a higher intensity, rested longer and possibly used a more explosive tempo. We know that’s all good for strength, so this part makes sense.
.
The authors attribute the better muscle growth in the Heavy Duty group to the short rest period and its effect on anabolic hormone levels, even though growth hormone levels were measured and they increased similarly between groups. I spent a large part of my review paper with Brad Schoenfeld on how long to rest in between sets for maximum muscle growth debunking the myth that the spike in growth hormone levels from short rest periods is beneficial for muscle growth, so I doubt this was the cause. Growth hormone levels strongly correlate with lactate levels and seem to have a metabolic rather than an anabolic role. In a subsequent publication from Brad Schoenfeld et al. that I co-authored, we showed that short rest periods are detrimental for muscle growth, not beneficial. So I think it’s safe to throw this hypothesis out the window.
.
Why then did the Heavy Duty group gain more muscle? I would think based on the results they did more volume, but total volumes were not reported. Not to mention, short rest periods and a slow tempo normally decrease total work output for a given amount of sets. In fact, it’s beyond me how the subjects could stay in the 6-10 rep range for 4 sets with only 10 second rest between sets. So for now my official answer is: Whiskey Tango Foxtrot.
.
I’ve contacted the corresponding author of the study and will let you know when I have more details about the study design. If you have any ideas, feel free to discuss them on my Facebook page.
.
To be continued…
d

The authors replied to my email. They did not address the majority of my questions, but they stated the following.

As Brad Schoenfeld’s and my papers have concluded essentially the opposite, consider me skeptical of this conclusion. I was literally writing a letter to the editor with my concerns about this paper as I received their reply. It turns out the corresponding author is the director of the journal he published his own paper in. This raises obvious questions about the standard of peer-review the publication was subjected to. I look forward to reading their upcoming publication, but I hope it is published in a different journal with proper peer-review and better reporting standards. As it stands, I do not give any credence to this paper.