A new study just compared 3 groups of people on a fat loss diet. They all lived on liquid diets with ~1250 kcal without exercising.

The abstract reads: “Body weight and body fat mass significantly declined in all groups between 0 and 1 week and between 1 and 2 weeks (p < 0.05), while skeletal muscle mass remained unchanged only in the KD 1.7:1 group (p > 0.05). ” The authors conclude that an exogenous ketone diet “can maintain skeletal muscle mass while reducing body fat mass” and “weight loss induced in this way does not cause any loss of skeletal muscle.” These findings seemingly support the idea that ketogenic diets are protein sparing.

Are ketone shakes the new protein shake? Let’s look at the body composition data below. I don’t know what statistical wizardry they pulled to conclude the KD1.7 group didn’t lose muscle mass, because protein losses were literally identical in KD1.7 and the balanced diet (BD) and skeletal muscle loss was about the same: 1 kg in KD1.7 vs. 1.2 kg in BD. As such, the ketones did not seem to spare protein.

The KD4 group clearly performed the worst, losing twice as much muscle as KD1.7. That’s not too surprising given their lower protein intake. 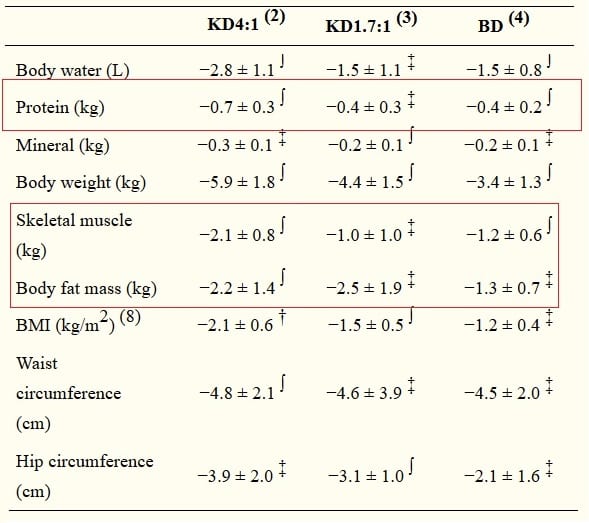 While the ketones did not seem to spare protein, these data suggest they did accelerate fat loss. Fat mass decreased almost twice as much in KD1.7 as in BD and hip circumference also decreased considerably more. Do exogenous ketones help burn fat?

I’d first note this was only a 2-week study and 2 of the 4 authors had a conflict of interest: “J.K. is employed at Maeil Dairies Co., Ltd. company that developed the product and H.L. is employed at MDwell Inc. distributor of the nutrition drink.” However, the differences are large enough to be meaningful and study sponsorship does not normally entail fraud. The lead author did not have any conflict of interest and the funding for the study came from Korean government sources, not from the supplement company. I think the sponsorship bias made the researchers frame the results as they did in the abstract and conclusion, but the data themselves are legit.

But I don’t think the greater fat loss was due to the ketones. There may have been a small thermogenic advantage (MCTs in ketone products have a very high thermic effect, especially compared to processed food), but I think the ketone groups consumed fewer calories than they reported, or the BD group consumed more. This trend is visible in the self-reported energy intakes, but it didn’t reach statistical significance. We also have a good mechanism for why the keto groups likely consumed fewer calories: both keto groups reported better changes in fullness and appetite than the balanced diet group. This supports other research on what is arguably the greatest benefit of ketogenic diets: ketogenic diets are significantly appetite suppressing, though anecdotally not all people experience this to the same extent and other dietary factors like fiber and protein still matter.

Appetite suppression is currently the most promising benefit of exogenous ketones in my mind and I plan to conduct a study on this this year. However, they’re absolutely not a magic pill, which brings us to perhaps the most notable findings of this study: the side-effects. Both keto groups reported increased nausea. The KD4 group also reported significant constipation, which is not too surprising given they were on a literally zero fiber diet.  How bad was it? “…compliance was rather low, and the drop-out rate was high at 50% for KD4 and 39% for KD1.7.” Ouch, nearly half of the participants couldn’t even manage 2 weeks on the ketone drinks diets. On the bright side, the keto diets seemed to have a slightly more positive effects on the subjects’ cholesterol profiles than the balanced diet. The high fat intakes weren’t unhealthy.

Overall, this study is exemplary of many common mistakes I see people make on ketogenic diets. Here are my take-home messages:

The truth about processed vs unprocessed foods
This is a guest post by Calvin Huynh. A majority of people including professionals don’t understand... Read More »

Do Strength Trainees Really Need Carbs?
This is a guest post from Calvin Huynh inspired by our online PT Course. Calvin did a... Read More »
Home » Articles Nutrition
Share via