Stubborn fat. If you’re a man, it’s that layer of fat on your lower abs that just doesn’t seem to go away. If you’re a woman, it’s the fat around your hips. Now of course we can diet that off eventually, but wouldn’t it be nice if we could just take a pill for it? That’s where yohimbine comes in. Yohimbine is known as not just any fat burner but specifically a stubborn fat loss aid.

Yohimbine is an alpha-2-receptor antagonist (a2-blocker), which causes your body to increase noradrenaline production. In effect, yohimbine is similar to other stimulants like caffeine in that it activates the sympathetic ‘fight-or-flight’ nervous system and increases your energy expenditure, but yohimbine affects different receptors, which gives yohimbine a few unique properties.

For one, although yohimbine is a ‘natural’ supplement extracted from the yohimbine tree, it is not unconditionally safe. Yohimbine is more of a wildcard than many other stimulants and it’s not to be screwed around with. At higher dosages, it has serious psychoactive effects ranging from impulsivity and increased sex drive to anxiety. It also comes with notable cardiovascular risk, including potentially elevated heart rate and blood pressure, especially when combined with other stimulants. Dosages upwards of 200 mg, around 10 times as much as used in research, can result in a coma, psychosis, retrograde amnesia, seizures and tachycardia. More sensible dosages are generally free from clinical side effects, but increased blood pressure and anxiety are often reported anecdotally and in studies.

Yohimbine’s main property of interest for stubborn fat burning is that it’s an alpha-2-receptor antagonist. Fat cells have different receptors that control it, like buttons on your tv’s remote control, including the a2 receptor. The a2 receptor has the pesky property of functioning like a negative feedback loop for noradrenaline, which causes it to shut down fat burning (lipolysis). So fat with more a2 receptors is normally harder to burn, hence the term stubborn fat. But since yohimbine blocks the a2 receptor, this should theoretically make the fat lose its stubbornness and become easier to burn.

Emphasis on ‘theoretically’, as your body’s regulation of stubborn fat loss involves many more processes than just a2 receptors.

Remember the spot reduction myth: you can’t change your fat distribution by targeting fat loss in specific body parts by exercising them [2, 3]. In other words, all the crunches in the world won’t give you a sixpack if you’re not lean enough. ‘Abs are made in the kitchen’. Personally, I haven’t done any specific ab training in years and it hasn’t seem to hurt my abs. 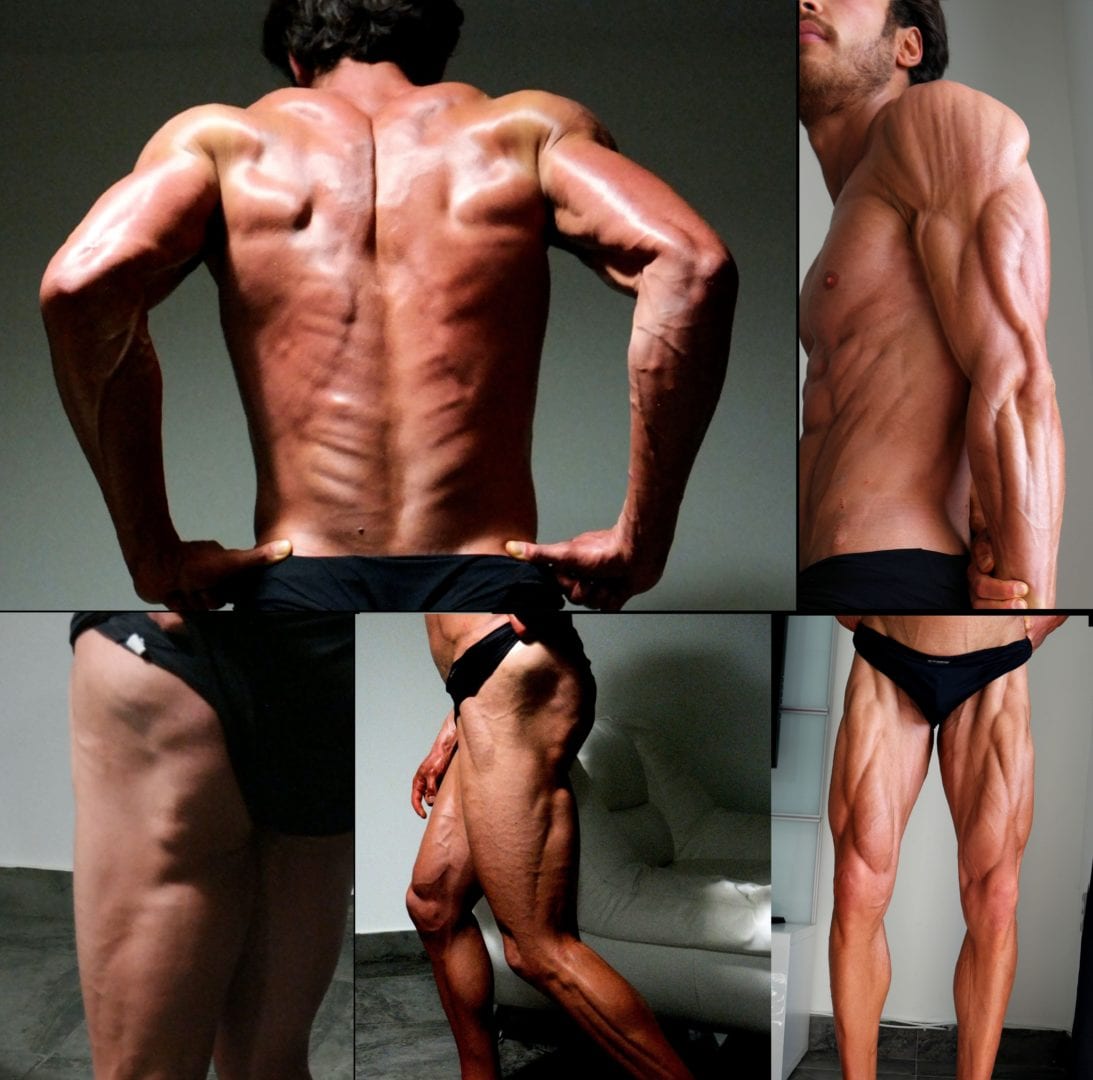 No yohimbine. No spot reduction. No stubborn fat. Just meticulous diet and exercise.

Most of my clients also have no trouble achieving a full sixpack without any specific ab training. You can induce acute local fat burning, but it seems that your body over time closely maintains your genetic blueprint’s fat distribution.

So we have to turn to empirical scientific research to see what yohimbine really does to your fat distribution.

Sax performed a 6 month trial with an incremental dosage of yohimbine up to a hefty 43 mg a day. Not only was there no effect on the men’s body fat distribution as measured both by waist-to-hip ratio and by CT scan, there was no significant additional decrease in body fat percentage or blood lipids at all in the yohimbine group compared to the placebo group.

In fact, no study to date has found any effect of yohimbine supplementation on your fat distribution.

While there’s no evidence that yohimbine helps with stubborn fat loss specifically, some other research does suggest it can help with overall fat loss.

The soccer player study is often heralded as the proof that yohimbine supplementation causes significant fat loss without any side-effects or loss of muscle mass or performance. However, this study has several major limitations.

More support for the idea that yohimbine causes water but not fat loss is provided by other research showing that 15 mg yohimbine a day increases weight loss but fat burning (lipolysis) is unaffected. This study did find that the yohimbine group had a lesser decrease in resting energy expenditure of 6% vs. 10% (and 7% vs. 13% during exercise), but the difference was not statistically significant. If we tentatively extrapolate these – once again not significant – findings to an individual with a resting energy expenditure of 2500 calories, it would mean that yohimbine increased energy expenditure by 100 calories a day. This person would burn 31 more calories during a training session that initially burned 500 calories.

Even if we assume that the lack of statistical significance was caused by insufficient statistical power, the study was still biased. The group receiving yohimbine was 8.2 kg (18 lb) heavier than the control group. This could result in higher relative retention of muscle mass during the diet and therefore a higher maintenance of metabolic rate.

An older Polish study found that 15 mg yohimbine did significantly increase acute resting energy expenditure and exercise-induced energy expenditure by 8% in both lean and obese women. The yohimbine also increased the release of glycerol and free fatty acids, i.e. fat burning, and over the 4 week cross-over study period this led to a whopping 0.7 kg / 1.5 lb greater average weekly weight loss rate. However, this seemed to mostly be the result of 1 week’s outlying data with an unbelievable increase in weight loss, in contrast to the general trend of weight loss slowing down over the study period (see table below). 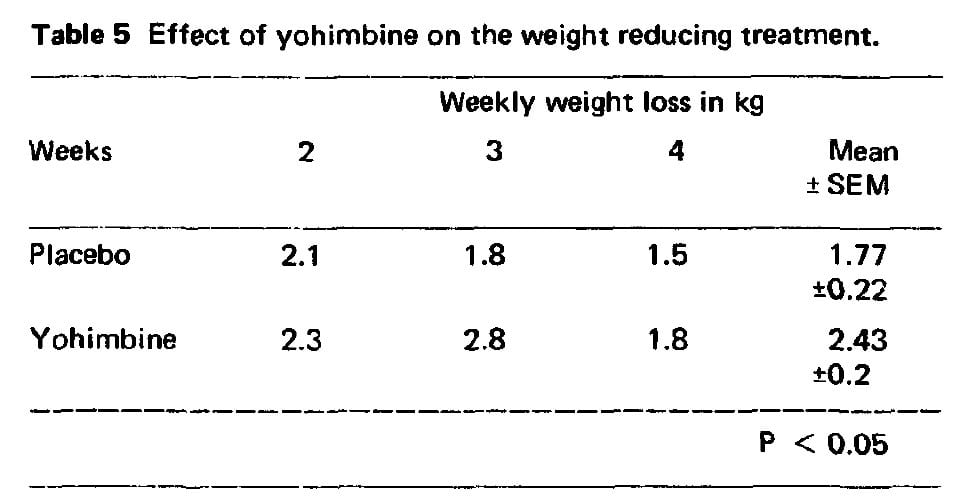 Since the modest increase in energy expenditure doesn’t match up with the measured weight loss, it’s likely that either diet adherence was an issue, the data is just a fluke skewed by that 1 week, or the weight loss was again mostly water weight.

A French study found no effect on 18 mg yohimbine per day during an aggressive weight loss diet on either weight loss or fat burning.

How do we reconcile all the above seemingly contradictory findings? The disparity between short and long term findings is likely the result of tolerance. Tolerance to yohimbine quickly develops: the stimulation of noradrenaline is lost in just 15 days of using just 12 mg a day, though yohimbine still modulates the activity of noradrenaline after that time.

Secondly, yohimbine’s fat burning effect is mainly noticeable during exercise and it is completely suppressed by the consumption of food. In practice this means yohimbine is likely only considerably effective when combined with intermittent fasting.

Interested in information like this about every supplement worth knowing? This article is an excerpt of the online Henselmans PT Course Certification Program. The course contains similar evidence-based information about everything related to muscle growth and fat loss.