It’s not often that extremely unexpected scientific findings are published, but Goto et al. (2017) just did. They studied the effectiveness of triceps skull-crushers with a full range of motion (ROM) compared to a ‘keeping the tension on the muscle’ partial mid-range of motion. They found the partial ROM group had better gains in muscle growth as well as strength. 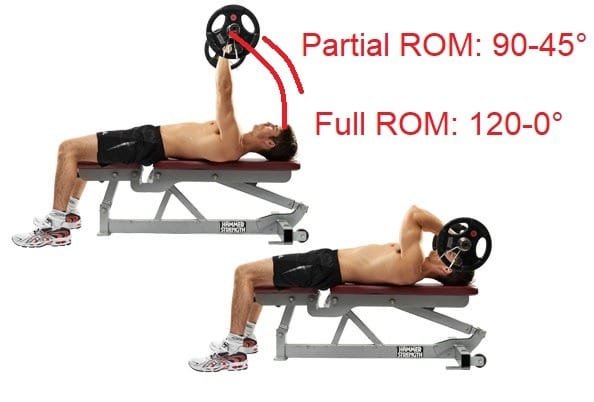 Here’s an overview of their study. 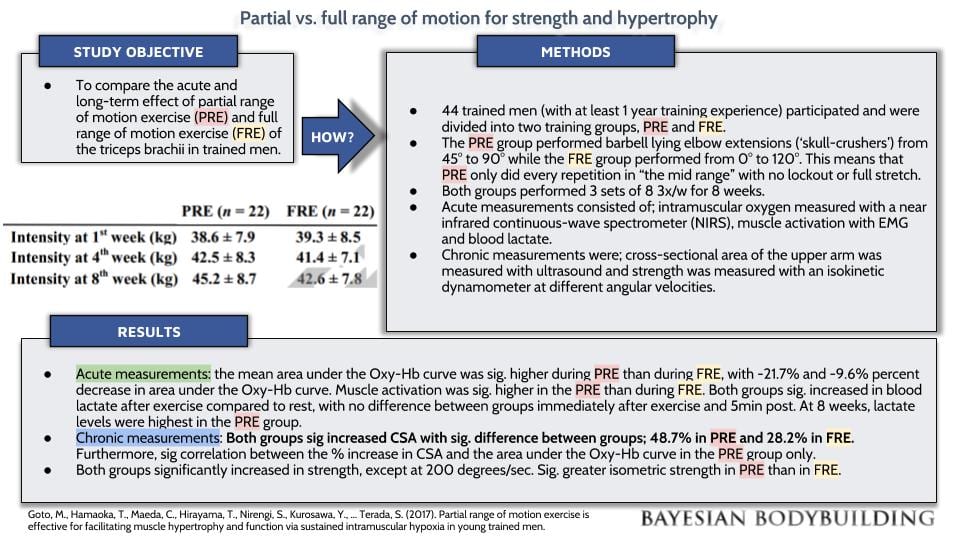 On the surface, these results lend strong credence to the bro bodybuilding wisdom of ‘keeping the tension on your muscle’ and getting a good pump.

Specifically, Pinto et al. had performed a very similar study of Scott biceps curls and found the full ROM group had significantly better strength development and a far greater effect size of muscle growth. 2 Previous studies had also looked at the effects of avoiding lock-out on the bench press and both favored the full ROM group.

Moreover, the proposed mechanism of metabolic stress and hypoxia (oxygen shortage) as drivers of muscle growth is unlikely given that the training was performed for sets of 8. Blood flow restriction training, which induces high metabolic stress and hypoxia, generally stops benefiting muscle growth around ~40% of 1RM. It only seems to work when the weights are too light to induce enough muscle activation on their own.

So how come this new study found midrange partials produced better gains then? One explanation may be that barbell skull-crushers have such a terrible resistance curve that it’s actually best to avoid the top portion of the exercise. There is practically no resistance at all in that part of the movement. Indeed, the midrange partial group experienced higher levels of muscle activation. However, it’s not clear why having a deloaded part of an exercise would decrease muscle growth. Cluster sets, which have rest in between every rep or cluster of reps, are just as effective as straight sets for muscle growth. Plus, Scott curls and bench presses have a similar, albeit smaller, resistance curve problem and previous research still found full ROM training for these is superior.

The finding of greater growth may be a measurement artifact. The study doesn’t report when muscle thickness was measured. Judging by the huge effect sizes – nearly 50% more triceps mass in 8 weeks in trained lifters?! – the measurements may have been performed quite shortly after the last workout. That leaves open the possibility that much of the ‘muscle growth’ was actually just muscle swelling. Perhaps the midrange partials induced more cell swelling due to the greater metabolic stress.

Even if there was sufficient delay between the last workout and the muscle thickness measurement, muscle thickness was only measured at 1 location. We only know what happened to muscle size at basically 1 slice of the muscle and we know that the triceps undergoes regional muscle growth: it grows more in highly activated regions. Since muscle growth was measured in a slice around midway on the triceps, it’s plausible that the midrange partials induced more muscle growth only specifically in this region of the muscle. Total muscle growth may have actually favored the full ROM group or not have been different between groups.

Measurement artifact would also explain why there was no difference between groups in the dynamic strength tests. The midrange partial group only got better strength on the isometric strength test (‘static holds’), but this was performed at 90°, exactly the region they trained in. Since we know strength development is specific to the exercised ROM, the greater static strength gain may have been simply due to the training in this region, not due to any greater muscle growth.

Future research may help clarify this lone study’s deviant findings. For now, however, it is at least another data point in favor of chasing high muscle activation levels in your training. Partials can achieve this, but you’d likely get better results by selecting exercises with an inherently good resistance curve so that you can overload your muscles along their entire length without having to compromise on ROM.