Aspartame is an artificial sweetener. It’s roughly 200 times as sweet as sugar and doesn’t have the bitter aftertaste of stevia [2]. That’s why you need 200 times less aspartame to give a food or drink the same sweetness. So you’re consuming 200 times fewer calories. Aspartame is basically calorie-free. Aspartame doesn’t affect your appetite, glucose or insulin levels and can thus easily save you lots of calories in your diet and result in relatively easy weight loss [2, 3, 4, 5].

Aspartame isn’t very heat stable though, so you can’t add it to anything before you bake or cook it. It’ll lose its sweetness. So you  have to add it to cold products or after heating them before you consume them. Still, pretty sweet, huh?

It would be, if aspartame were safe. Is aspartame safe?

What happens to aspartame in your body?

I can already hear the first objection of the mob with pitchforks outside: “Aspartame is artificial. Of course it’s not safe! Nothing good can come of putting crazy chemicals in your body.”

Aspartame is indeed an artificial sweetener, food additive E951 (E-number). This chemical sounding classification frightens many people, but this fear is rooted in ignorance. Fear of the unknown is a basic principle of human psychology. There are about 1500 other E-numbers, of which hundreds are artificial. Ironically, the E-number is in fact a certificate of safety. It means the European Union has decided a food additive is safe for human consumption. 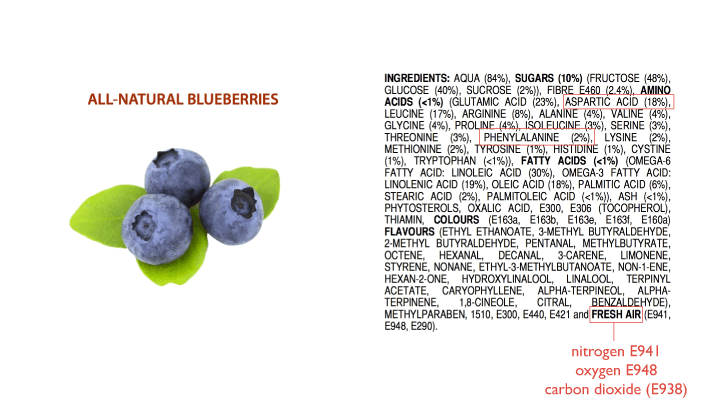 Still, many people don’t like the idea of consuming ‘a chemical substance’, so let’s go deeper into what happens when aspartame enters your body. Your body hydrolizes (digests) aspartame efficiently and fully. The substance is in your body for a short time and doesn’t accumulate. Aspartame gets broken down to 50% phenylalanine, 40% aspartic acid, and 10% methanol.


Toxic substances? No, all of these substrates are a natural part of common foods, such as tomatoes, milk, eggs and meat. The acceptable daily intake of aspartic acid in most people’s diets is 60 times higher than what can be converted from aspartame. For phenylalanine it’s 35 times higher. A glass of tomato juice contains 6 times more methanol than the same amount of aspartame-sweetened soda. Studies have found no toxicity and no increase in plasma concentrations of methanol, formic acid or phenylalanine after consuming up to 50 mg/kg aspartame a day. That’s the equivalent of about 17 cans of diet soda for the average 70 kg person.

Take-home message: Aspartame is broken down into harmless substances that are found in much higher concentrations in many whole foods. 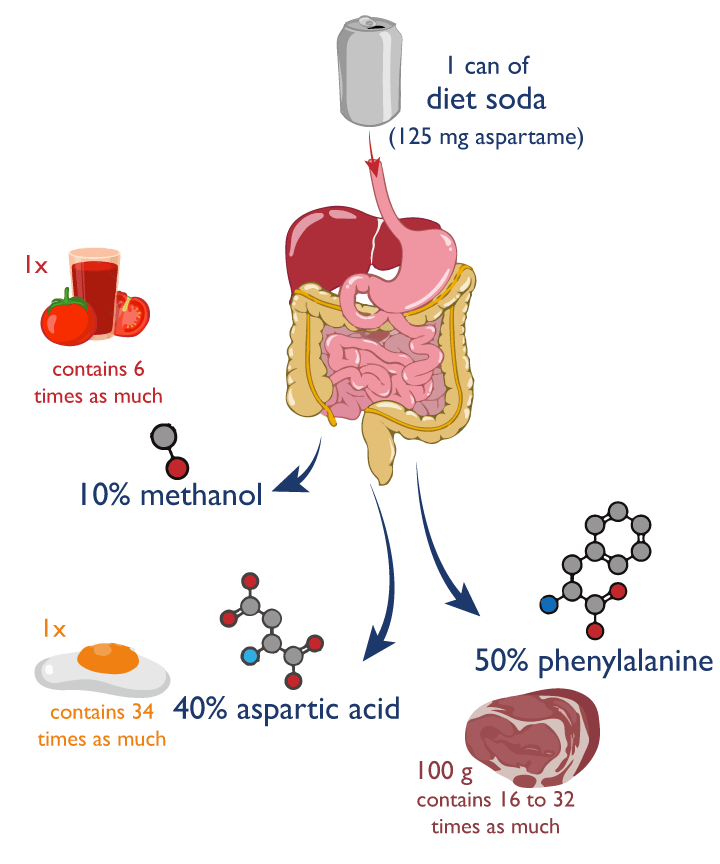 Even though aspartame is only in your body very briefly and it is then broken down into harmless substances, it could still be harmful during its short visit in your body. Before we look at the scientific evidence, it’s important to realize what harmfulness – toxicity is the correct terminology – really entails. Many people think that some substances are toxic (harmful) and others are not. This is not the case. Every substance is toxic, even water. Toxicity is often measured as the needed amount when side-effects occur, compared to an average consumption. For example, LD50 is the degree of toxicity at which an organism has a 50% chance of dying. When we call a substance harmful, this actually means the dose of this substance at which you experience side-effects isn’t much bigger than a normally-sized portion. For example, even a small amount of heroin can be very harmful, which is why we call it toxic. However, you have to drink absurd amounts of water to get ill, so we call water safe. One of the most basic principles of toxicology is therefore: the dose makes the poison. The question is thus not “Is aspartame toxic?” but rather “How much aspartame do you need to consume for it to potentially be harmful?”

Let’s put the toxicity of aspartame in perspective. A diet soda typically contains 50-125 mg of aspartame. The Acceptable Daily Intake (ADI) of aspartame is 40-50 mg/kg according to the following organizations.

Even if we take the highest aspartame content of 125 mg per can of Diet Coke and the lowest ADI of 40 mg/kg, a 50 kg woman can consume 16 cans of Diet Coke every day without harmful effects. If we go with an ADI of 50 mg/kg as the FDA deems safe and Coke Zero with 58 mg per can, an 80 kg man can consume 68 cans of Coke Zero per day without harmful effects. Unsurprisingly then, most people do not consume anywhere near the ADI.

If you’re worried that your aspartame intake may actually be close to the ADI, note that the ADI is calculated by taking the lowest dosage at which side effects are observed in research (animal research mostly as in humans no health effects have been reliably found) and then applying an error margin of factor 100. So no health risks have actually been found up until you’re consuming a 100 times the ADI or upwards of 1600 cans of diet soda. Per day.

The European Food Safety Authority has a rule that substances should be re-evaluated yearly. This has happened for aspartame several times, and again and again, they conclude that there’s no reason for worry: aspartame is safe for human consumption, including children and pregnant women, as long as the Acceptable Daily Intake isn’t exceeded.

Aspartame is one of the world’s most investigated food ingredients. The FDA, often regarded the world’s leader on food safety, has even announced that the safety of aspartame is “clear cut”.

Of course, just because all these authorities say aspartame is safe up to at least the ADI doesn’t make it so. Let’s look at the scientific research directly. In humans, the Acceptable Daily Intake has no relation to getting cancer, digestive problems, diabetes, artery or heart disease, or premature birth. [2] That’s the conclusion of a team of 5 international experts who were invited by the scientific journal Food and Chemical Toxicology to determine the safety of aspartame. If you’re skeptical about the researchers’ motives, this research was sponsored by the Italian Association for Cancer Research and published in October 2013.

Multiple other research reviews have analyzed literally hundreds of studies with more than 1,000 participants in total. These all came to the same conclusion: aspartame consumption below the Acceptable Daily Intake is safe. [2, 3, 4] And again, this includes cancer. A multitude of studies in humans, including one with half a million participants, supports that there is no consistent relation between aspartame consumption and any type of cancer. However, it may be noted that there is one study on isolated human cells (in vitro) and one on mice where signs of toxicity were found at 32-34 mg/kg/d. There is no evidence showing adverse effects of these intakes in controlled human research, but if you want to err on the side of very high safety, 30 mg/kg/d may be a prudent upper limit.

Given the highly positive safety record of aspartame and the well-documented health risks of excess sugar intake and obesity, for the average Western individual to avoid aspartame is quite ironic.

Take-home message: A multitude of studies from a multitude of health organizations consistently find aspartame is safe to consume up to the Acceptable Daily Intake of 40-50 mg/kg/d, the equivalent of drinking well over a dozen cans of diet soda every day. This intake includes a factor-100 safety margin.

Can you be aspartame sensitive?

Some people claim that no matter what the science says, they can directly feel adverse reactions to aspartame when they consume it.  They may get a headache or nausea after drinking diet soda with aspartame. So maybe some people are intolerant to aspartame, even though the majority of people can consume it safely? A team of researchers put this idea to the test. They got a group of self-proclaimed aspartame-sensitive people and compared them to a control group of people without any idea about whether they reacted to aspartame or not. Then they told the subjects they would receive aspartame twice, while in reality one time they were given a placebo once and actual aspartame the other time.

The self-proclaimed aspartame-sensitive subjects indeed reacted adversely to the aspartame. However, they also reacted just as adversely to the placebo. There were no significant differences between the placebo and aspartame consumption for any symptom. The researchers took urine and blood samples to study the biochemistry and metabolism of aspartame consumption. The aspartame-sensitive group had perfectly normal aspartame metabolism. In other words, the symptoms were a pure nocebo effect: people that think they’re aspartame sensitive just react psychologically to the idea of consuming aspartame regardless of whether they’re actually consuming aspartame. The symptoms are in their head, self-inflicted.

The researchers also unleashed a battery of psychological tests on the participants. The ‘aspartame-sensitive’ individuals had significantly higher sensitivity to stress and differed from the norm in several psychological realms, including how they reacted to their feelings.

So if you get any weird symptoms after consuming aspartame, it may be wise to check if you’re not just paranoid about aspartame and you’re making life needlessly hard on yourself and subconsciously self-inducing the symptoms. Reading this article should be a helpful first step in correcting your mindset.

Oh and if you think you can taste whether something was flavored with aspartame, in this study the participants couldn’t. Of course certain sugar-free or light products may still differ in flavor from their sugary counterparts.

Aspartame in the media

If aspartame’s safety record is so impressive, how come you hear reports about aspartame’s health risks so often? Commercial media selectively broadcast news that evokes people’s emotions, fear in particular. There are dozens of rat studies showing aspartame intake is related to cancer or some other health problem. That is the very point of those studies to determine the ADI: keep increasing the dosage until problems arise, calculate the human equivalent dosage and factor in a 100-fold safety margin and voila, you have the Acceptable Daily Intake for humans. Nobody reads a headline saying: “Yet another study supports aspartame’s ADI.” No, they say:

Take-home message: The media profit from spreading fear and controversy,  not the truth. As a result, people that watch the news tend to have a distorted view of crime and aspartame’s safety. Trust in science, not the news.

When something sounds too good to be true, it’s often false. A substance that makes something as sweet as sugar without calories certainly sounds too good to be true. Moreover, people tend to view ‘tasty’ and ‘healthy’ as opposites. Our society makes us believe dieting always goes hand in hand with suffering. Still, aspartame is the most popular sweetener in the world. For good reason. Its safety record is impressive. The hundreds of thousands of people who have consumed aspartame in clinical research remained healthy while making their diets tastier. Thanks to the wonders of modern technology, we can now sweeten our food without the calories of sugar.

Sometimes you can have your protein cake and sweeten it too. Enjoy it!

Interested in science-backed information about everything you need to know for optimal health and fitness? Our online PT Course has you covered.