As the title suggests, the researchers compared a weekly training frequency of 2x vs. 4x. The abstract reads: “only the low frequency group enhanced arm circumference and elbow flexors thickness values and decreased their fat mass… only the low frequency protocol increased upper body hypertrophy and improved body composition.”

This study is making the rounds in the fitness community as proof that training a muscle 4x per week is inferior to training it 2x.

Before jumping to conclusions, however, let’s go into detail.

The study had 9 men perform the following 2 workouts each week for 6 weeks total. The low frequency group trained twice a week (2x), performing each workout once with 4 sets per exercise. The high frequency group trained 4 times per week (4x), performing each workout twice a week with 2 sets per exercise. So both groups performed the same total amount of sets per week and trained the same exercises. The training intensity was 75% of 1RM (8-12 RM) in both groups. 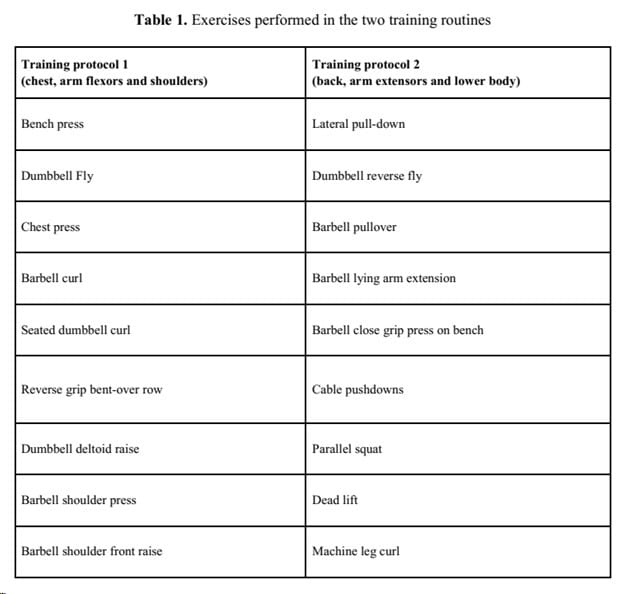 If you look at the splits, you can see that this study is not a regular comparison of training each muscle 4x or 2x per week. The 2x frequency group was only training their legs, chest and lateral delts once a week compared to 2x in the 4x frequency group. However, the training frequency for the back and arms was 2x vs. 4x, as these muscles were trained every workout in both groups. So for the majority of the body, this was a comparison between training a muscle once a week vs. twice a week, but for the back and arms specifically it was 2x vs. 4x. I have no idea why the authors used this weird design instead of a comparison between, say, an upper-lower and a full-body split, but it is what it is.

Another important clarification is regarding the subjects. Although they were ‘strength trained men’, they were complete novices. Before the study, they were barely benching their bodyweight for 1 rep and they were squatting only a little bit more than 4 plates on the bar. The low frequency group was also overweight with 22% body fat.

Now that we’ve clarified the study design, let’s look at the results. The following table summarizes the study findings.

Astute readers will notice there were no significant differences between groups for any outcome. The abstract makes it sound like there were based on the significance level of pre-post changes, but that’s just the result of poor statistical power with only 9 subjects per group and a 6 week study duration. What matters is the difference between groups. And there was none. There were 2 trends though.

Still, all in all the 2x frequency group did seem to get slightly better results, particularly for the arms. All below the threshold of statistical significance, but in exercise science we often have to go beyond that due to the poor quality of research available compared to other fields. So this study may be interpreted as evidence that novices should err on the side of training each muscle 1-2x per week compared to 2-4x.

Lastly, it should be emphasized that this study, like most studies, equated training volume across groups. This is never the case in practice. Higher training frequencies typically result in higher repetition training volumes due to spending less time in a fatigued state. This is arguably in fact the main benefit of higher frequency training, providing an effective and time efficient manner for advanced trainees to increase their training volume.

In novices training each muscle 1-2 vs. 2-4x per week with the same training volume, there were no significant differences in the development of strength, power or body composition. There was a tentative trend for inferior results in the 2-4x frequency group though, suggesting that novice trainees have no business training each muscle more than twice a week.