Cholesterol is a small, fat-like molecule that supposedly clogs our arteries and kills us. But is cholesterol really the bad guy? Or maybe it’s the opposite: a lifter’s best friend?

Cholesterol & your gains: the research

Riechman et al. (2007) found that cholesterol may be good for your gains. In their study, 49 elderly individuals completed a 12-week strength training program with nutritional guidelines. Retrospective analysis of participants’ nutritional logs showed a linear dose-response relationship between dietary cholesterol intake and lean body mass increases (per DEXA). The more cholesterol they consumed, the more muscle they gained. This relationship held up when protein and fat intake were controlled for. See the figure below. 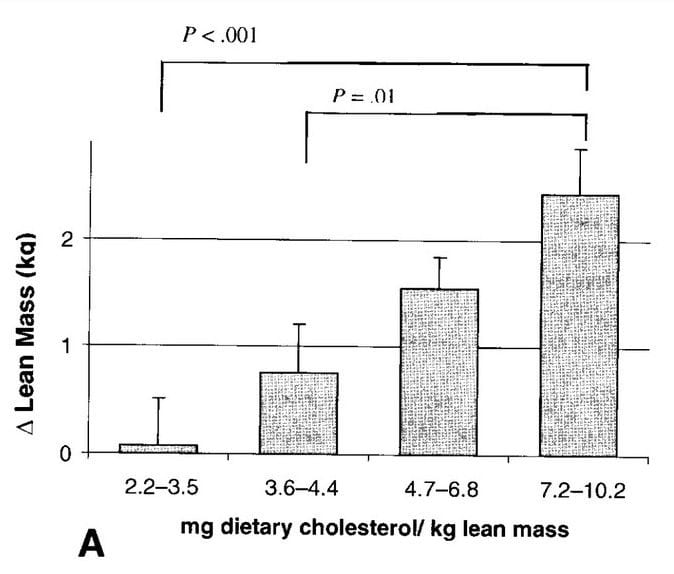 Most other research on the relationship between cholesterol and muscle growth hasn’t been published yet. Below is a recap of the data we currently have.

Research on statins also hints at a beneficial role of cholesterol for your muscles. Statins are a type of medicine used in the treatment of various cardiovascular (heart-related) problems. Statins lower your cholesterol and a common side-effect is myopathy. Statin therapy can reduce muscle strength and functionality, induce inflammation in your muscles (myositis) and even complete muscle fiber death (rhabdomyolysis).

A low cholesterol intake may also be the reason why lacto-ovo-vegetarian diets tend to result in less muscle growth than omnivorous diets in strength trainees, even with the same protein intake. Cholesterol content in plant lipids is about 100-times lower than in animals. However, many other factors, like protein quality, could also explain the lesser muscle mass of vegetarians.

All in all, the available research suggests a high-cholesterol diet is good for muscle growth and strength development.

How can cholesterol increase muscle growth?

The main-stream media demonize cholesterol based on its potential effects in your blood. If you’ve been basing your perception of cholesterol around that message, you may be surprised to find that cholesterol has several potential mechanisms of action to increase muscle growth.

Simply put, cholesterol can help your muscle cells resist damage and can improve their ability to repair themselves after your workouts, which is crucial for muscle growth.

In fact, in the first study of cholesterol’s effect on lean body mass, the authors also found a significant correlation between saturated fat intake and lean body mass growth. Many diets with a high cholesterol content are also rich in saturated fat, so this is not too surprising, but it leaves open the possibility that cholesterol is actually irrelevant and it’s all about saturated fat instead. To find out, the Bayesian research team contacted Dr. Riechman, the principal investigator of the above study on cholesterol. He confirmed that they controlled for the total fat intake (and protein and energy intake) in the analysis on cholesterol, strongly suggesting cholesterol plays an independent role for muscle growth.

Before everyone starts eating 10 eggs a day, we feel the research is a bit suspect: only about 1 in 3 studies on the relation between cholesterol and muscle growth have been published, even though the research was conducted several years ago already. And most of the published research mentioned above was performed by the same principle investigator, Dr. Riechman, who received research grants totaling roughly $2.7 million (that we could find) from sources including the U.S. Poultry & Egg Association.

However, it’s just a fact that scientific research is expensive, so people willing to put a lot money into it, often have something to gain from it. Individuals like Bret Contreras and Menno Henselmans that pay for scientific research out of their own pocket are very rare. The scientific industry is set up so that the integrity of the researchers should prevent the sponsors’ conflict of interest from deceiving the public. And this generally works. Food industry funded nutrition research does not have significantly different outcomes than research with other funding. Plus, Dr. Riechman also received funding from the American Heart Association and the US Army. Not to mention, it’s pretty damn far fetched to pour millions of dollars and risk your career and reputation to promote – of all things you could sell – cholesterol specifically for – of all possible markets – individuals interested in muscle growth. Us meatheads are a tiny part of the population. Us meatheads interested in scientific research tinier still.

Ok, let’s take the tinfoil helmets off and assume there’s no major conspiracy theory going on. That begs the question…

But isn’t cholesterol bad for your heart?

A review paper on the heart-related health effects of cholesterol concluded: “Epidemiological data do not support a link between dietary cholesterol and cardiovascular disease.”

A review on egg consumption concluded that “the evidence suggests that a diet including more eggs than is recommended (at least in some countries) may be used safely as part a healthy diet in both the general population and for those at high risk of cardiovascular disease, those with established coronary heart disease, and those with type 2 diabetes mellitus.”

Here’s how much cholesterol is in various foods according to the USDA.

Since only animal foods contain significant amounts of bioavailable cholesterol, vegans may want to compensate for their low cholesterol intake by consuming more (saturated) fat so the body can produce enough of its own cholesterol.

2020 update: See this post for a new study on this topic.