Remember the ‘yeah, she squats’ and ‘squat booty’ memes? Up until a few years ago, squats were the flagship booty builder exercise. But times are a changing. In large part due to the work of my friend Bret Contreras, the hip thrust has in many groups surpassed the squat in the battle of the booty builders. Many lifters now consider the squat to be a mediocre glute exercise while the hip thrust supposedly reigns supreme for dat ass. 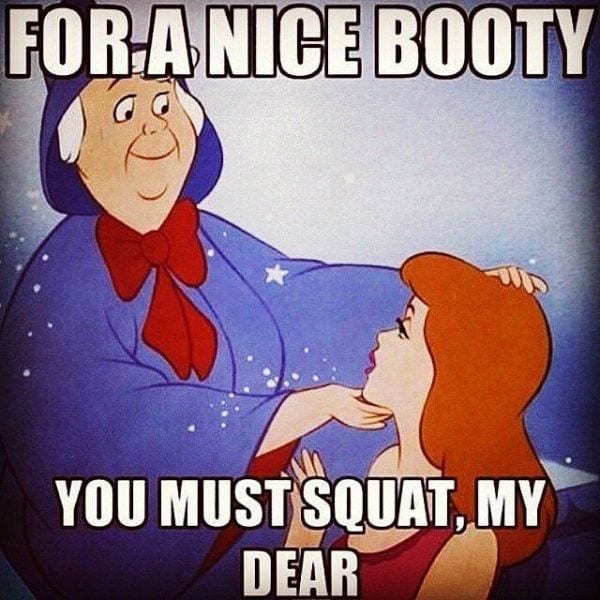 Interestingly, in the one country famous for its royally developed butts, Brazil, the hip thrust has not really asscended to the same level. I’ve lived there and will return there after my seminar tour in the US and I can confirm that while hip thrusts are certainly in many women’s exercise repertoire, they’re typically seen as just one of many tools, nothing magical. So it makes sense that a team of Brazilian researchers, led by Matheus Barbalho, put the hip thrust to the test in a fantasstic study.

A group of well-trained women performed either just hip thrusts or just deep squats (to ~140° knee flexion, which is normally well below parallel) for 12 weeks for their lower body. I suspect the women were powerlifters or on gear (which is very common in Brazil for women), as they were deep squatting and hip thrusting around 220 pounds before the study started and still made very impressive gains during the study for the minimalistic programs they were on.

After 12 weeks, the researchers measured 1RM strength gains in the squat and hip thrust and muscle growth in the glutes and quads (ultrasound muscle thickness measurement halfway down the quadriceps femoris and gluteus maximus).

Which exercise do you think was better for the glutes and quads?

I’ll start with the obvious results. Hip thrusts led to a significant increase in hip thrust strength and glute size. Hip thrusts also increased quad size and squat strength a little, but the change was statistically insignificant. Squats led to significant muscle growth in the glutes as well as the quads, and significant strength gains in the squat as well as the hip thrust. Doing hip thrusts led to substantially more hip thrust strength gain than doing squats in absolute terms, but the difference wasn’t statistically significant. This is in line with earlier research that big compound exercises can often develop strength in more isolation type exercises as well as doing that exercise itself; sometimes better even in beginners, but advanced trainees often face greater specificity and need to do an exercise directly to develop it further.

Now on to the key study result: who won the battle of the booty builders? Bret Contreras, brace yourself… Squats blew hip thrusts out of the water, straight to pancake land. Squats led to over double the glute growth and about 6 times more quad growth(!) 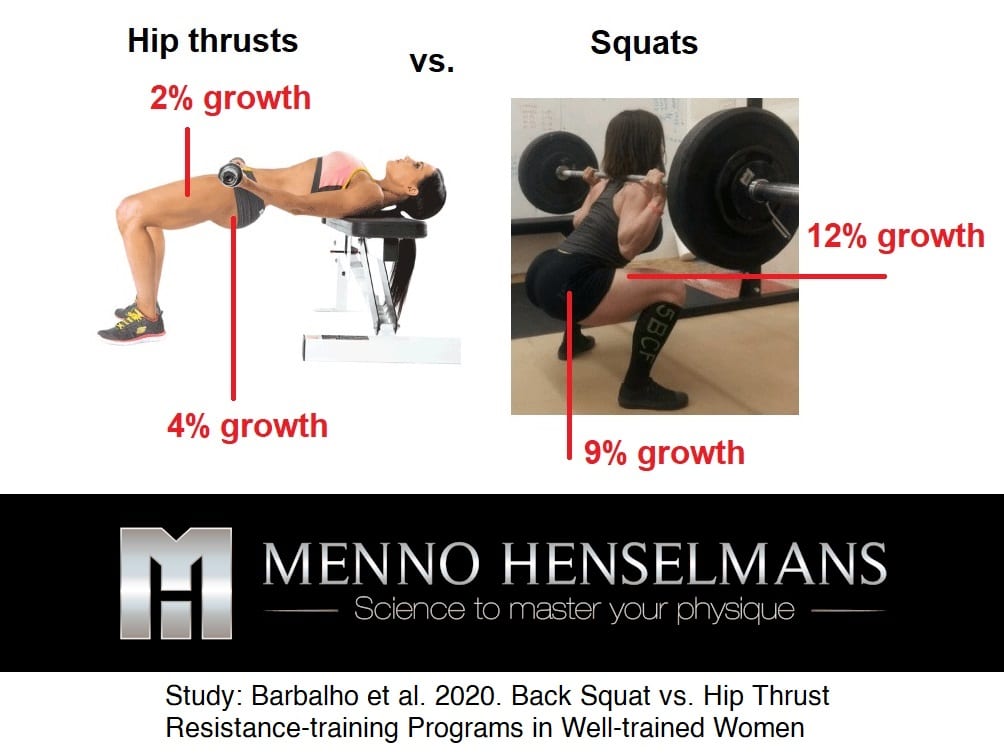 How can this be? Didn’t earlier research prove hip thrusts are better than squats? Many people are under this impression, but no study has actually ever directly compared hip thrusts and squats for muscle growth. The idea that hip thrusts are better than squats for the glutes was purely based on electromyography (EMG) research. By putting electrodes on our body during exercise, we can get a decent idea of muscle activity, but muscle activity does not directly translate to muscle growth.

2 Years ago I wrote a post arguing for why EMG activity can be particularly misleading when comparing hip thrusts to squats. Hip thrusts score well on EMG research because they have a short range of motion (ROM) and a decreasing strength curve, which makes the top part of the exercise very hard. The sticking point of the exercise is at full hip lock-out, which makes you get a great peak contraction with a very notable glute contraction. So you feel your glutes a lot and you get high peak and average muscle activity in EMG, but none of that directly causes muscle growth. The primary stimulus for muscle growth is mechanical tension on the muscle fibers and during a hip thrust, you only get maximal tension for a brief moment at the top of the movement over a short ROM. If we’d go by EMG research, hip thrusts would actually be an outstanding quad exercise, but most people just swept that idea under the rug, as it just didn’t make sense.

In contrast, full squats achieve high tension on the glutes as well as the quads over almost their full ROM. While there’s not much tension all the way at the top, the sticking point is about in the middle, which is quite ideal for a free-weight exercise. While you won’t feel your glutes as much generally, squats also achieve a good stretch in the glutes and quads, which can augment mechanical tension and cause muscle hypertrophy via the addition of sarcomeres not just in parallel but also in series, lengthening the muscle fascicles.

While it may be tempting to ditch hip thrusts as an overhyped fad and rethrone squats as the king of booty builders, this study does not mean you shouldn’t do hip thrusts. While squats may be better in isolation, they’re not mutually exclusive and because they stimulate the glutes maximally at different muscle lengths, they’re in fact complementary. Bret Contreras has always argued for this as well. Below are the take-home messages that I tell my clients.